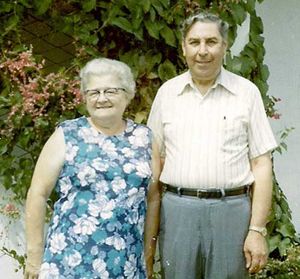 After his conversion when age 12, Ward Shantz was baptized in the Grand River by the family’s church, Bethany Mennonite Brethren in Christ (Evangelical Missionary) Church. On 6 October 1934, he married Mildred Kathleen Brubacher (31 December 1907-8 July 1985). Kathleen’s parents were Samuel Brubacher (8 June 1875-28 October 1934) and Rosetta Bricker (16 August 1874-1948) of Berlin. Kathleen and Ward had a son and a daughter. Kathleen Shantz, who for a time was a lawyer’s secretary, developed her own ministry to pastors’ wives and Bible College students and for 10 years wrote a column for pastors’ wives in the district newsletter. She was committed to hospitality whenever her husband might bring home guests unexpectedly.

Ward M. Shantz graduated with a BTh from Marion College (now Indiana Wesleyan University), in Marion, Indiana, USA (1933) and an MA from Winona Lake School of Theology (1934). Later he obtained a BA and the BD from the University of Western Ontario, London, Ontario (1949 and 1951). The latter degree was obtained through the affiliated Waterloo Lutheran Seminary in Waterloo.

As a probationer in the Ontario Conference of the Mennonite Brethren in Christ Church, Ward Shantz was assigned to the pastorate of Aylmer (1933-1937), Toronto West (Bethel, now Wellspring) (1937-1942) and Gormley (1942-1943). Shantz, ordained in 1936, was for a period, superintendent of the Ontario Conference Young People’s Society.

Ward Shantz was part of discussions in the 1930s recommending the Ontario Mennonite Brethren in Christ begin a Bible school. He was appointed as the first principal when the school opened in January 1940 in Stouffville, Ontario. The school was moved to Gormley when Ward was appointed pastor there in 1942, and finally to Kitchener in 1944. He became president of Emmanuel, now called a Bible College, when elected superintendent of the Ontario Conference of the United Missionary Church in 1953. Daily leadership of the college was cared for by L. Lyness Wark as principal 1953-1960. H. Bruce Wideman succeeded Shantz as president of the College in 1960, leaving Shantz free to lead the district for 10 more years. During his nearly two decades as superintendent, the Conference expanded from 34 to 60 congregations, successfully riding the baby boom and receiving accessions from Evangelical United Brethren Church persons who did not want to join the United Church of Canada in 1968. During his term, Wesleyan holiness theology was affirmed, and he was elected a representative of the (American) National Holiness Association in 1959.

After the merger, Ward Shantz became the assistant director of Overseas Missions of the Missionary Church at Fort Wayne, Indiana, in June 1970 and acting director for over a year, 1973-1974. He retired to Kitchener in 1976, becoming the respected parliamentarian at annual conferences as well as a writer for historical projects.

Three years after the death of Kathleen in 1985, Ward Shantz married a fellow Bethany Church member, Winnie (Ariss) Goldsworthy, who had just finished eight years as an assistant to the administration of the United Missionary Church of Africa (UMCA) in Ilorin, Nigeria. The two returned to Nigeria to teach English skills to pastors of the UMCA in a short-term mission in 1989. Winnie Shantz was born in 1921. A writer and local historian herself, she died of cancer on 24 October 1998.

As teacher and superintendent, besides numerous reports and articles on pastoral theology, Ward M. Shantz wrote a year and a half of daily devotions for the denominational magazine, the Gospel Banner (1944-1945). Ward preached on a Kitchener radio program in the 1950s. His other published works include the following:

Ward Shantz was an encouraging, even-tempered man who could sleep after board meetings and kept peaceful relations with all. As district superintendent, he was in charge of camp meetings. He was happiest when many were converted and the budget was met. He often fasted and prayed alone for the conversion of those who attended. Even as superintendent he continued as a counsellor of boys at church camps.