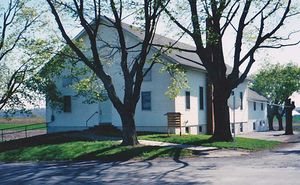 Sharon Mennonite Fellowship, in Lebanon County, Pennsylvania, USA, worships in the Union Meeting House which is one of the oldest landmarks in Bethel Township. Situated on a direct commercial trade route from Philadelphia to Harrisburg and westward, great wagon trains followed the road which passes the meeting house.

On 23 April 1740, Rudy Hunsicker warranted 200 acres of land (then in Lancaster County) where the meeting house now stands. He received the patent for the land from Thomas and Richard Penn on 18 November 1748. Rudy Hunsicker gave a portion of this land for public use before his death in 1768. On 6 February 1738, Christian Brightbill warranted the land on the opposite corner of the crossroad and donated a portion of it for a cemetery. Always a separate property from the church, the cemetery contains the graves of many pioneer settlers from the 1700s and is still in use.

The building had been unused for several years when its doors were once again opened for regular worship services on 13 February 1977 by the Sharon Mennonite Fellowship. The nucleus of the new congregation was about 12 families from the Myerstown Mennonite Church (Lancaster Conference) who desired Bishop Homer Bomberger's leadership. Among these families were Myerstown's minister, Aaron Bowman, and deacon, Paul Gingrich. Two families from the East Hanover Mennonite Church (Lancaster Conference) and their minister, Peter Smith, joined the new congregation. After Sharon was established, the three congregations under Homer Bomberger's leadership (New Haven, Fairhaven, and Sharon) were formally organized as the Mid-Atlantic Mennonite Fellowship (MAMF) in 1978.

Aaron Bowman was ordained as bishop on 25 February 1978 by Bishop Homer Bomberger for the Sharon and Fairhaven congregations. Council was favorable to receive two ministers, Cletus Doutrich and Ivan Weaver, from the Meckville Mennonite (Lancaster Conference) congregation. Four families from Meckville and several additional families from Myerstown also became part of the congregation.

As of 1 January 2013, Sharon had 110 members. The ministerial team at the beginning of the year consisted of Ivan Weaver, bishop; Douglas Brubaker and Ray Zimmerman, ministers; Caleb Stauffer and Kenton Martin, deacons.

In 2013, Douglas Brubaker accepted the call to lead in establishing a new congregation at Preston, Maryland. Several families from Sharon moved to Maryland in 2014.