From GAMEO
Revision as of 07:24, 5 November 2018 by RichardThiessen (talk | contribs) (Updated table of ministers.)
(diff) ← Older revision | Latest revision (diff) | Newer revision → (diff)
Jump to navigation Jump to search
A checked version of this page, approved on 5 November 2018, was based on this revision. 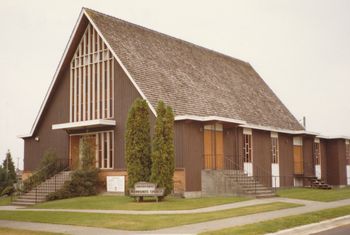 Sherbrooke organized itself as an independent congregation on 1 January 1968 with 174 members. Over a period of 10 years (1968-1978) the membership more than doubled, necessitating already in 1973 the building of an annex. The services in Sherbrooke were initially all in the German language. In 1973 separate German and English language services were introduced. Bilingual services helped for a while, but in 1974, separate services in English and German came into effect. This arrangement lasted until early 2010, when keeping a German service was no longer feasible.

Cornelia Lehn reported in 1990: "The people who made up the congregation came from many different places in the world: 39 percent were born in Russia, 23 percent in Paraguay, 18 percent in Canada, 11 percent in Germany, 4 percent in Brazil, and 5 percent in other countries."

By the 1990s the congregation experienced a decline due to the movement of retired members to cities like Abbotsford and the movement of younger families to the Fraser Valley in search of more affordable housing.

Many of Sherbrooke’s remaining members have moved further away, thereby making the church more a drive-in church than a community church. Still, the sense of serving the community remains strong. Together with other churches Sherbrooke tries to help people to recover from substance abuse (Place of Refuge) and to help people with physical needs (Food Bank). Sherbrooke reaches out to children in the neighborhood with a Summer Ministries Program. Members of Sherbrooke are actively involved in the Fraser Street Mennonite Central Committee Thrift Store.

The present pastor is James Wittenberg.

Churches in Profile. Clearbrook, BC: Conference of Mennonites in British Columbia, 1978: 94-98.