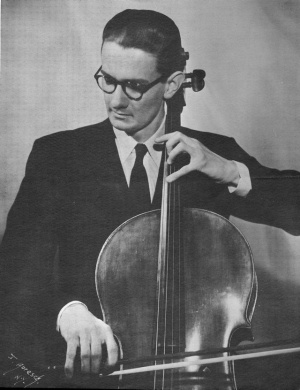 Reynold graduated from Winkler Collegiate, Winkler, Manitoba, where he played cello in the school orchestra and the Mennonite Symphony Orchestra under Benjamin Horch, and at Sängerfests under K. H. Neufeld. At age 18 he was a member of the Canadian Broadcasting Corporation (CBC) Concert Orchestra, played with the Winnipeg Symphony Orchestra and University of Manitoba String Quartet, and appeared in recital in many concerts in southern Manitoba.

From 1952 to 1956 Reynold studied with Leonard Rose at the Curtis Institute of Music in Philadelphia. While at Curtis he played viola da gamba with the American Society of Ancient Instruments, made a solo appearance at Carnegie Recital Hall in 1956, and appeared in recital in Philadelphia and New York.

Following graduation from Curtis Siemens became principal cellist of the CBC Concert Orchestra in Toronto and first cellist of the Hart House Orchestra, University of Toronto. Reynold made solo appearances on the CBC Distinguished Artists Series and played with the CBC Symphony Orchestra when it made recordings for Columbia Records with Igor Stravinsky conducting. Reynold’s recording with the Boyd Neel Orchestra of London, UK, was released in 1963.

Reynold Siemens became Professor of English Literature at the University of Alberta in Edmonton in 1966, where he taught for 25 years. His publications included a book on Wordsworth and writings on women and music.

During their time in Edmonton Reynold and Frances participated in the life of First Mennonite Church in Edmonton. He retired to Kelowna, British Columbia, in 1991, where he lived until his death in 1996.

Siemens, Reynold. "One Role of the Woman in the Artist's Development in Certain British Artist-Hero Novels of the Nineteenth and Early Twentieth Centuries.” PhD dissertation, University of Wisconsin, 1966.