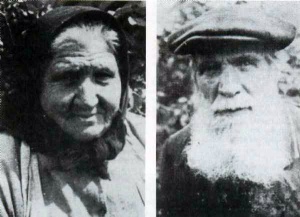 Heinrich Sobering, Mennonite pioneer and accountant, was born on 20 February 1863 in the Netherlands. He married Magdalena Rieger (1870-1955) in Hungary on 22 January 1889. Together they had 11 children--all of which survived to adulthood. Heinrich died on 24 November 1943 in Steinbach, Manitoba.

As a young man, Heinrich was believed to have been a member of the Doopsgezind (Mennonite Church in Holland) Church. At the age of 19 he left Holland for Hungary where he found work as a bookkeeper. Heinrich met his wife Magdalena, who belonged to the Catholic Church, while living in the village of Zichydorf. A feeling of spiritual restlessness at this time caused him to start searching for a church that believed in nonresistance. He was preparing to join the Church of the Nazarene when a mutual friend, Herman Klebs put him in touch with some Mennonite gentlemen in Canada. After corresponding with Isaac L. Warkentin and Johann W. Reimer of Manitoba, Heinrich made preparations to emigrate to Canada.

With his wife and six children Heinrich settled in Steinbach, Manitoba finding work in the office of the Steinbach Flour Mill. Heinrich began attending the Church of God in Christ, Mennonite where he became a member after being rebaptized on 2 September 1900. His wife Magdalena was also made a member after being rebaptized the following year on 27 January 1901. Being a person committed to peace, Heinrich found the war years very upsetting. He continued to work for H.W. Reimer Enterprises until about 1931 when he retired.

Heinrich was a friendly outgoing individual whose Christian faith and commitment to peace would continue to be an inspiration for future generations.