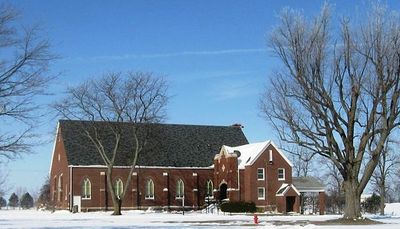 South Union Mennonite Church (MC), formerly known as the North (Amish) District or the King’s Church, located one mile north of West Liberty, Logan County, Ohio, a member of the Ohio and Eastern Conference, was founded by Amish families from Wayne and Holmes counties, Ohio, and Mifflin County, Pennsylvania. In 1840 the Peter Yoder family moved from Wayne County to Union Township, Logan County, and by 1845 enough settlers had arrived to be organized into a congregation by two Holmes County bishops. After a second Amish group had settled in the Kennard-Kingscreek area in Champaign County (now the Oak Grove congregation), Ohio, the two groups were considered the north and south districts of the same congregation.

In 1855 the North District built the first Amish meetinghouse in Ohio one mile west and a half mile north of the present South Union church. Here, also, the first Amish Sunday school was organized in 1863 by the young minister, David Plank. For many years the North District held more strictly to some of the old Amish practices than the South and frequent disagreements arose. These differences led to a complete rupture between the two districts during the late 1860s, Bishop-Deacon John P. King, quite conservative, serving the North (Logan County) District and Bishop John Warye the South. David Plank with his father, Samuel Plank, who was a deacon, and a considerable body of the members of King’s congregation sided with Warye and in 1875 built the Walnut Grove church several miles west of King’s church. In 1876 King’s congregation built the South Union meetinghouse at its present location. In 1886 King moved to Coffee County, Kansas, leaving the congregation in the charge of Christian K. Yoder, brother of John K. Yoder, of Wayne County, Ohio.

In 1890 a group of South Union young people refused to unite with the congregation because they were denied an English class in Sunday school. This group was baptized into a Mennonite church at Elida, Ohio, and became the nucleus of the Bethel Mennonite congregation at West Liberty, Ohio. In 1895 the South Union and Walnut Grove congregations decided to unite under one bishop. David Plank was chosen by lot and served both congregations until his death in 1912. Then A. I. Yoder, son of C. K. Yoder, was ordained bishop and served until his death in 1934. S. E. Allgyer, bishop of the Oak Grove church in Champaign County, then served as bishop of both congregations until his retirement in 1950.

In 1953 the congregation completed a large brick church building, and in 1955 a commodious Sunday school unit.