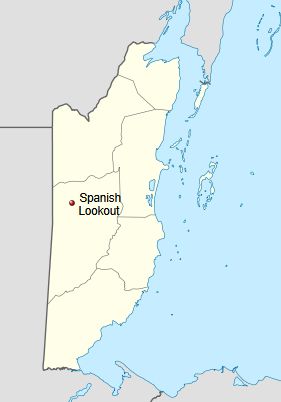 Spanish Lookout, Belize (coordinates: 17.217222, -88.978611 [17° 13′ 2″ N, 88° 58′ 43″ W]) is located in central Belize midway between San Ignacio and Belmopan. In 2000 the town had a population of 1,786. In 2011 it was largely an agricultural community with some light industry, furniture making, prefabricated wood houses and the only oil field in production in Belize, producing 5,000 barrels a day. The town specialized in auto parts and was the country's leader in tire hardware and steel imports. It was a major producer of dairy products, poultry, vegetables and cattle produce, supplying the majority of the country with these products. The producer of Belize’s most popular chicken brand, Quality Chicken, was located at Spanish Lookout. Western Dairy, Belize’s only commercial producer of milk, was also located in the town.

Spanish Lookout Colony was settled in 1958 by approximately 75 families of Kleine Gemeinde Mennonites from the Quellen Colony, Chihuahua, Mexico. They left Mexico because land was not readily available, and because they objected to the social welfare law. Spanish Lookout comprises 18,500 acres (7,500 hectares) in the Cayo District and is situated on the north side of the Belize River. This area was jungle when the settlers arrived. Products in 1986 were eggs, broiler hens, beans, corn, grain sorghum, milk, cheese, and beef cattle. Vegetables were the major source of income during the first 10 years, but they were no longer produced in any sizable quantity in the late 1980s. Administration, roads, bridges, and schools were maintained by the colony. The overall impression is that Spanish Lookout was a flourishing community. A number of families have moved away to the Interlake area in Manitoba, Canada, and an additional 25 families relocated in the Northfield Mennonite settlement in Nova Scotia, Canada. However, natural growth maintained population levels despite these migrations. As of 1987 there were 1,108 residents. Refugees from Guatemala and El Salvador have been attracted to the colony for employment. The colony maintained four schools in 1987 which included an enrollment of 75 refugee children. -- D. F. Dueck

The taxation system of Spanish Lookout Colony came with the first settlers from Chihuahua, Mexico. An agreed-upon percentage of the different items raised on each farm was deducted at the collection center, often the local store. Many items were taxed at one percent, others at two percent of the selling price. This applied more to eggs, broiler hens, milk, lumber, garden produce, and cattle. For field crops (corn, milo [sorghum], soy beans, etc.) the farmer was responsible to give a trustworthy answer. A direct tax was also levied on other goods.

Two or three days' labor were required yearly of all men over 21 for road maintenance. There were also taxes on land, residences, vehicles, farm equipment, etc. The government collected land taxes through the settlement administration. Income taxes were filed personally. As a general rule, taxes were paid only on items sold off the settlement. Not all of the taxes were started at the same time, but rather as the need arose. No extra tax was charged to families with school children. Everyone shared in the taxes for education.

Teachers received one month of training each year before the opening of the school term. Teachers, regardless of experience, were expected to visit other schools in the settlement. Two conferences were held annually, where all teachers, trustees, board members, and parents in the particular school district might attend. The curriculum was bilingual (English and German). Most children attended school for seven years. In the 1980s there were problems in obtaining teachers. -- John B. Loewen