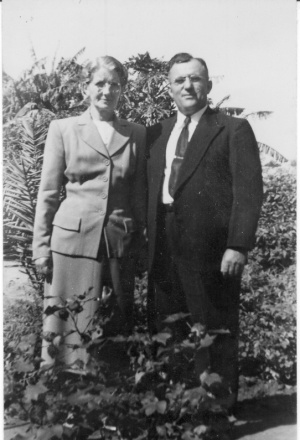 In 1910 the Sukkau family moved to Waldheim, Molotschna Mennonite settlement. Sukkau’s father was called into service during World War I and the family relocated, in 1915, to nearby Rückenau, where both sets of grandparents lived. Here he completed his elementary and high school (Zentralschule) education. He was born again at 16 and baptized and received into the Rückenau Mennonite Brethren Church in 1920. With life in the Soviet Union becoming hazardous, the family immigrated to Canada in the summer of 1924. After seven months in Markham, Ontario, the family settled in the Arnaud, Manitoba area.

Between 1931 and 1935 Gerhard Sukkau attended the Winkler Bible School for three years, graduating in 1935. He was ordained to the ministry in 1937. In 1939 the family relocated to Yarrow, British Columbia. Here he taught in the Elim Bible School until 1952, and for many years was also the principal. From 1945–1948 he interrupted his teaching for two and a half years of studies at Tabor College in Hillsboro, Kansas. He graduated in 1948 with B.A. and Th.B. degrees. Through the Randmission and the West Coast Children’s Mission, Sukkau was also active in ministry to both Mennonites and others living beyond the Mennonite settlements in British Columbia.

From 1952-1959 Sukkau served as Bible School teacher, Bible expositor, evangelist, and administrator with the Mennonite Brethren Committee of General Welfare and Public Relations among Mennonite settlers from the Soviet Union living in Paraguay, Brazil, and Uruguay. His characteristic joy and enthusiasm was much appreciated by these people, who had experienced a great deal of hardship.

Upon their return to Canada the Sukkaus settled in Winnipeg, Manitoba where, gifted with a practical business sense, he was the treasurer of the Canadian Mennonite Brethren Conference until shortly before his untimely passing. During this time he served as a minister in the Elmwood Mennonite Brethren Church and sat on the aforementioned Committee of General Welfare and the Board of Mennonite Central Committee (Canada).