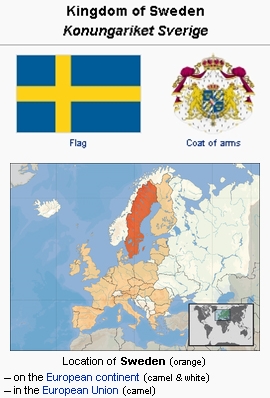 The Kingdom of Sweden is situated on the Scandinavian Peninsula in Northern Europe. Sweden has land borders with Norway to the west and Finland to the northeast, and Denmark lies to the south. Sweden's land mass is 450,000 km² (174,000 sq mi). The 2008 population was 9,234,209.

At the beginning of the 21st century approximately 75% of Swedes belonged to the Church of Sweden (Lutheran). Some 275,000 Swedes were members of various free churches, and there were 92,000 Roman Catholics and 100,000 Eastern Orthodox Christians living in Sweden. Because of immigration, Sweden also has a significant Muslim population. Almost half a million are Muslims by tradition.

Except for Melchior Hoffman's visits to Sweden, Anabaptists seemed to have bypassed Scandinavia. Later the Lutheran state church suppressed all free church movements until the mid-19th century. Mennonite contact with Sweden has been largely circumstantial: participating in international church gatherings; young people attending Torchbearer's Bible School, a Capernwray school in Holsby Brunn; Mennonite Central Committee (MCC) volunteers marrying Swedish spouses and settling there. Several books by Mennonite and Brethren in Christ authors have been translated into Swedish. After 1983 Thomas and Disa Rutschman worked in Jokkmokk as overseas missions associates with the Mennonite Board of Missions (Mennonite Church). Their work consisted of pastoring a small free church and related outreach efforts.