The conference appointed a committee consisting of Jacob J. Klassen, Jacob P. Martens, and Abram J. Friesen to do a feasibility study. The committee visited various care facilities. In the fall of 1956 they conducted a demographic survey of members in the B.C. Mennonite Brethren Conference, and also conferred with provincial government officials. In November 1957 the committee brought a detailed recommendation to the conference, stipulating that a 25-bed facility should be built in Clearbrook at a cost of $100,000. However, the project lacked sufficient support from the churches to allow for conference involvement. The Findings Committee of Klassen, Martens, and Friesen then decided instead to form a society that could build a home for the aged. 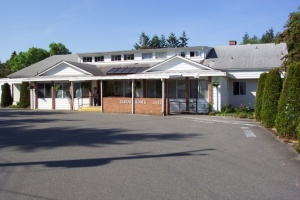 The committee invited interested members from the British Columbia MB Conference to attend an organizational meeting 24 September 1959 in the Clearbrook MB Church. It was agreed to call the new organization "Tabor Home Society." The home would be named "Tabor Home." A committee was elected to oversee the development of the society’s work. It consisted of Jacob J. Klassen, Jacob P. Martens, Albert Dyck, Abram J. Friesen, Jacob Lepp, and Henry P. Hooge. A property located west of Clearbrook Road, and a little south of what is now South Fraser Way was purchased from a Mrs. Enns for $13,500. Blueprints for the building were drawn up and a grant of $41,253 was received from the provincial government to help cover construction costs. 18 July 1960 marked the occasion of the sod turning celebration for Tabor Home.

Over the years Tabor Home has experienced several facility expansions. The first addition in 1963 added 23 more rooms. Further expansions took place in 1970, 1972 and 1973. In 1989 an independent living facility with 39 units was completed. Originally called Sunset Manor, the name was changed to Tabor Manor. Residents had the option of a hot noon meal if they wished. The last major development began in 2003 when the Fraser Health Authority and British Columbia Housing accepted a proposal from the Tabor Home Society board to construct a 104-unit assisted living facility. The government would fund 88 units and 16 would be user pay. The first residents moved in during the month of November 2006. The official opening of Tabor’s assisted living facility, Tabor Court, was 18 June 2007. With this latest addition Tabor had become a full campus of care now referred to as Tabor Village. Over 240 residents were part of the Tabor Village as of March 2009. 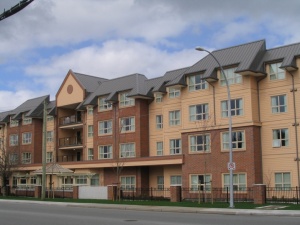 Tabor Home Society and its governance have changed significantly since its inception.  At its founding as a society, members of British Columbia Mennonite Brethren churches were invited to an organizational meeting. The membership fee was $50.00. A working committee was elected to move this project forward. Though most of the people attending this meeting joined the new society, the membership remained relatively small. The board that was formed to oversee the operation of Tabor Home sometimes became involved in the day to day operational decisions, and a number of board members volunteered much time at the home. In order to strengthen the membership base, a resolution was sent out to area MB churches in 1982 inviting them to become participating churches by having their members also become members of Tabor Home Society, unless individual members chose to decline. To qualify, members needed to be in good standing with their church. The Society required an annual membership fee of $1.00. Ten churches in the Abbotsford and Chilliwack area accepted this invitation, providing the society with over 3,000 members. As of March 2009 there were nine participating MB churches: Arnold, Bakerview, Central Heights, Clearbrook, King Road, Northview, Ross Road, South Abbotsford, and Yarrow.  Each participating church may provide one board member and in the case of churches with more than 800 members, two board members may be appointed. Three additional board members at large may be appointed by the board. The board now functions as a policy board rather than an administrative board.

Tabor Home began as a personal care facility with the administrator functioning as "home father." Not only was he responsible for the business and daily management of the home, he also served as chaplain, counselor, and as male nurse when needed. It was expected of the first administrators that both the husband and wife serve as a team, with the wife having supervisory responsibilities as well. Even after a chaplain was hired, the administrator assisted in providing spiritual care to the residents. As Tabor Home expanded and its residents needed more specialized care, a registered nurse was hired to serve as director of resident care. In 1987 a government grant was given to upgrade the home facilities so it could be registered as an intermediate care facility. Over the past few years most new admissions required complex care. This greatly increased the workload of the nursing staff. The government’s Ministry of Health provides most of the operational funds for the Tabor Home and Tabor Court. Tabor Manor, however, receives no government funding.

The social makeup of the residents has changed over time. In its early years, Tabor Home’s residents were mainly members of the participating Mennonite Brethren churches. Until 1982, annual general meetings were conducted in German.  Since the government now pays many of the operational costs and is responsible for the placement of residents in Tabor Home and in the funded units of Tabor Court, the residents now represent diverse ethnicity, nationality and faith orientation.

Some things have not changed. The original motivation to provide care for seniors was rooted in the Anabaptist/Mennonite understanding of the Christian faith.  Members of the society continue to believe that spiritual care is integral to caring for the whole person. The current mission statement states that "Tabor Home Society is a Christian health care community providing care from the heart in an environment of compassion, sensitivity, and respect for the whole person." The board and management of Tabor Campus of Care believe that the values and virtues promoted by the Christian faith greatly enhance the quality of care that can be provided, and positively affect the social context in which that care is given.

Reports and Minutes from Board meetings and Annual General Meetings.