Terek Mennonite Settlement was located in the southeastern corner of European Russia, on the Terek River, which flows into the Caspian Sea in the Eastern Caucasus, bordered on the north by the Aktash River, and situated north of the railroad between Rostov and Petrovsk on the Caspian Sea. 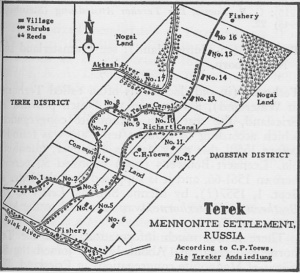 The settlement was established in 1901, on 66,960 acres of land purchased by the Molotschna settlement from the Lvov brothers for about 1,000,000 rubles. The landless families received 108 acres each, while some individuals who had farms were permitted to purchase land in order to make the financing of the purchase possible. The total settlement was divided into 17 villages, each village consisting of 24 to 35 farms, each of which had 108 to 216 acres of land. Some land was not distributed and remained community land, and some of it was wasteland. The journey from the Molotschna settlement to the Caucasus took about a week. Each village received a name and a number, as follows: 1, Wanderloo; 2, Khartch; 3, Talma; 4, Konstantinovka; 5, Sulak; 6, Alexandrovka; 7, Maryanovka; 8, Rohrbach; 9, Nikolayevka; 10, Müdelburg; 11, Prätoria; 12, Ostheim; 13, Taranovka; 14, Kameshlak; 15, Kaplan; 16, Agrakhan; 17, Aktash. The latter two villages never materialized. Villages 1-13 were settled at once, and 14 and 15 in 1904. The settlement consisted of 536 families with 3,400 persons. The soil varied greatly and was somewhat sandy. Some of it had a saltpeter content. The land was flat, with some brush. The wells were, as a rule, 15 to 35 feet deep. Some community wells were much deeper. Soon it was discovered that there was oil in the soil. World War I prevented the drilling of wells.

Every village had a Schulze and the settlement had an Oberschulze, the first of whom was Gerhard Schmidt of Nikolayevka, followed by Gerhard Regehr and C. H. Toews. In 1915 a Cossack was put into this office by the government. When the Revolution broke out in 1917 he was succeeded by Cornelius Penner.

The settlement had an organization for the care of orphans (see Waisenamt). The first manager of this orphanage was Heinrich Günther, succeeded by C. H. Schmidt. The settlement also had a fire insurance patterned on the Molotschna fire insurance. The mail was originally received in the neighboring town of Khassav-Yurt. In 1908 post office and telegram service were established in the village of Nikolayevka. Nikolayevka was also the seat of the Oberschulze. The "Feldscher" in charge of the health program was M. Freimut. The distributing center (apothecary) was located in Talma. Mrs. Abram Funk, Mrs. G. W. Warkentin, and Margaretha Fast served as midwives and nurses. Cornelius Fast and F. F. Enns also distributed medicines.

During the first years the instruction of children took place in private homes. Most of the teachers had a very poor education. The teachers soon organized a "Lehrerkollegium," of which Cornelius Penner was the chairman. The school board consisted of Franz Enns, Bernard Fast, and Heinrich Sukkau. Regarding the religious life and the churches, see Terek Mennonite Church and Terek Mennonite Brethren Church.

The settlement made slow economic progress. In 1902 there was a total crop failure. Some soon began to irrigate land. Many, not accustomed to this practice, became discouraged. In 1908 and 1909, after repeated crop failures, many left. On the irrigated land the farmers harvested good crops of winter wheat. A commission consisting of four Tatars, two Russians, and two Mennonites of the Khassav-Yurt district, with the help of the St. Petersburg government, arranged to have irrigation canals established or improved. In addition to the "Talmak Canal" a second one was established known as "Richat-Canal." Irrigation took place in July or August. Two crops a year were harvested. Winter wheat, barley, oats, corn, sugar cane, and vegetables were raised. Great damage was caused by grasshoppers in 1909-10, and by frequent floods recurring in June, July, and August. In 1905, 105 persons died of malaria and typhoid fever, spread by the floods. In 1905 a dike about ten miles in length was constructed along the river in order to prevent floods.

The Mennonites raised cattle, horses, and hogs that they had brought along from the Molotschna settlement. They received good prices for their produce in the markets of Khassav-Yurt and Petrovsk. Because of the distance from markets, stores were opened in various villages, e.g., in Talma (Johann Derksen), Khartch (Daniel Boschman), and Rohrbach (Jacob Rempel). Cornelius and Franz Toews had a lumber and implement store in Nikolayevka. Most of the goods came from Khassav-Yurt and Petrovsk. In 1912 a state bank was opened in Nikolayevka. Johann Nickel established a flourmill in Talma and David Klassen built one in Nikolayevka. Smaller mills were found in various villages. A number of brick factories and carpenter and blacksmith shops were in operation. The governor of the Terek region visited the settlement in 1908 and 1913, and was received with great honors. During the war many of the men served in forestry camps and in hospitals.

With the Revolution of 1917 a new period started. First the settlers were hopeful. But it soon became apparent that the Nogays, Tatars, and Kumeks were now able to exploit the Mennonites without restraint, even driving away their horses during the night. Many Mennonites lost their lives during these attacks. The settlement held prayer meetings and asked the government for help. Finally, when life seemed impossible here, they decided to flee.

On 8 February 1918, a two-mile caravan of settlers moved in the direction of the city of Khassav-Yurt, leaving everything behind that they had built up in seventeen long years. Villages 7, 8, 10, and 11 followed later. Before they left they were attacked again. Many had to flee on foot. On 18 February, the larger part of the refugees was transported westward by train. The settlers abandoned 1,600 horses, 2,300 cows, 2,400 sheep, 958 hogs, implements, furniture, and all other property that could not be taken along.

Some of the settlers remained for some time in the Kuban area or outside the danger zone of the native population that had tormented them. In 1920, after the new government had been established, they were invited by the Dagestan administration to return to their settlement. After some negotiations in the capital, Petrovsk, an agreement was reached that they would get their farms back, that the trip to the settlement would be free of charge, that all the items that had been stolen would be returned, etc. In the spring of 1921 sixty families returned, and in the fall of 1921 forty-five more families followed. They settled in the villages 1-5 and 9. Some help was received from American Mennonite Relief. Many homes, churches, and other property had been destroyed. C. P. Toews became the chairman of the Mennonite administration. Soon theft and murder were repeated and it became obvious that the Mennonites could not stay at the Terek. By 1925 most of them had moved away. Many of them joined the movement to Canada. Others scattered over the various Mennonite settlements in Russia. The Terek Mennonite settlement was the only undertaking of this nature by the Mennonites of Russia that was a complete failure.