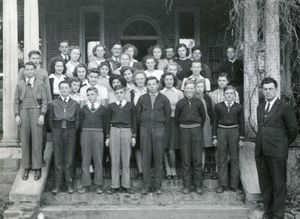 Henry grew up in the large Mennonite colony of Molotschna and enjoyed studies at the Zentralschule and the Kommerzschule in Halbstadt, the town where his parents were active in the Kirchengemeinde. He envisioned life as an engineer, though he loved all academic subjects, not least music and art. Early on he became--and throughout his life remained--deeply committed to the social and cultural institutions of the Mennonites, regarding them as instruments for enriching the well-being of not only the Mennonite but also the larger society.

The 1917 Revolution, followed by civil war and famine, destroyed his peaceful existence. When Henry was 14, anarchists brutalized his father; when he was 15, both his parents died of typhus. During the extremes of those years, Henry went from supporting the Selbstschutz (self-defence units) to working, during the famine of the early 1920s, for an “American kitchen” sponsored by Mennonites from the United States.

In 1926, like the thousands of Mennonites leaving Russia for Canada between 1923 and 1926, Henry made the decision to emigrate. Unlike most, he travelled without family or relatives. He hoped to bring his siblings-–Bernard, Johann, Jakob, Maria--to Canada. Political circumstances intervened and he did not see them again. In Canada, accompanied by his German/English dictionary, he made his way by train from Quebec City to Ontario, then Manitoba.

Henry worked as laborer on farms in southern Ontario and in forests in Northern Ontario, then on farms in Manitoba and in automobile factories in Windsor and Hamilton, Ontario. All the while he accumulated Canadian high school credits. While working in Manitoba he met Helen Reimer in Winnipeg. Her family had arrived there in 1926 from Molotschna and in 1929 moved to Leamington. In 1935 in Leamington Henry and Helen began an extraordinarily happy marriage. Meanwhile, some of Henry’s fellow Mennonites, recognizing his skill at sharing his broad knowledge and understanding of the Mennonite and the wider world alike, were suggesting to him that he should pursue a career as a teacher.

In 1935 Henry began his 35 year involvement with English-language education in Ontario. During 1935-36 he gained a first-class certificate at Stratford Normal School, qualifying him to teach up to grade 10. He taught for eight years in the two public elementary schools in the remote “Russian” Mennonite settlement at Reesor in northern Ontario (1936-44), then at Mackenzie King public school in Kitchener (1944-45). While he was there a committee of concerned Virgil-area Mennonite Brethren invited him to become the founding principal of a school they were establishing in Niagara-on-the-Lake, in a large historic house on a nine-acre estate they had acquired: Eden High School (in 1955 re-named Eden Christian College). He accepted their invitation. In the first year 36 students sat at rough-hewn desks while Henry, writing on a blackboard that he had constructed out of plywood, gave all the prescribed Grade 9 and 10 courses on the provincial curriculum. Further, determined to have his “Russian” Mennonite students embrace as fully as possible the culture of their new homeland, he taught a French course as well. In 1947 the school moved into a spacious new building on the estate. By 1948-49, with Grades 11 and 12 as well as three new teachers having been added to the school, there were more than 80 students, including some who boarded on the campus. “Lehrer Tiessen” (as his fellow Mennonites called him) led Eden from 1945 to 1950, and guided it through the provincial accreditation process. Meanwhile, he took summer courses at London’s University of Western Ontario, concentrating on Political Science (with a course in music alongside). In London, having no money for rent, he would live in his Ford car. He received his BA in 1952.

In 1950, while declining an invitation to apply for the principalship at Mennonite Brethren Collegiate Institute in Winnipeg, Henry moved again to Kitchener and returned to the public elementary system. He taught for three years at New Jerusalem, where the students were “Pennsylvania” Mennonites, and for 17 years at Bridgeport. His interest in art and music served him well alongside his regular teaching duties in history and geography. His memoir, Teaching in Ontario 1936-1970, documents his career.

From the 1950s onward Henry dedicated himself also to committee work and German-language adult Sunday School teaching at Kitchener Mennonite Brethren Church. On Sunday evenings at the nearby German-language Zion Mennonite Brethren Church, he occasionally contributed musically with his xylophone or mandolin. At the two local universities he taught evening courses in conversational German. At home he took pleasure in his wood-working shop, his artist’s easel, and his various musical instruments.

During his long retirement, Henry wrote an affectionate German-language tribute to “Russian” Mennonites’ experiences in Canada from the 1920s to the 1970s, 50 Jahre in Canada. But his major literary achievement was his vivid treatment of an earlier world that he had never entirely left: the Mennonite commonwealth in Imperial Russia. His book, The Molotschna Colony, illustrated with his own sketches and maps, delicately evokes the customs and rituals of the privileged life Mennonites had once known. Recalling a Molotschna that once flashed with “brilliance and grandeur,” he closed his book with a poem that invites readers to implore: “Lord, grant us wisdom from above / To solve life’s riddles here below.” For Henry--serious-minded, empathetic, thoughtful--life, repeatedly giving and taking away, was ever an invitation to make the best of what he had. He embraced his teaching opportunities, however difficult, in both the Mennonite and the broader “English” worlds. He seemed always at peace, to the end of his 97 years.

Tiessen, Henry B. The Molotschna Colony: A Heritage Remembered. Kitchener, ON: H.B. Tiessen, 1979.