From GAMEO
Revision as of 01:25, 2 December 2017 by RichardThiessen (talk | contribs)
(diff) ← Older revision | Latest revision (diff) | Newer revision → (diff)
Jump to navigation Jump to search
A checked version of this page, approved on 2 December 2017, was based on this revision. 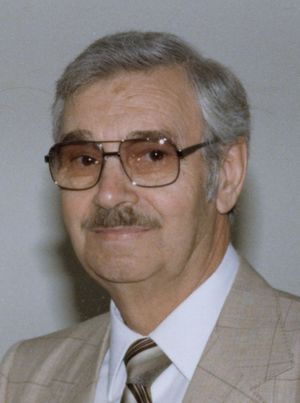 At the age of five, Abram left Russia and arrived in Canada with his widowed mother and his siblings at Quebec City aboard The Montclair. The family settled near Herbert, Saskatchewan, where Abram attended school and as a young man, together with his brothers and sisters, helped support his mother by working on nearby farms. Abram had a marvelous bass voice and enjoyed singing in church. Together with three friends, he formed a quartet, which performed in local churches and eventually on CHAB radio in Moose Jaw, Saskatchewan.

Abram was baptized on 20 June 1943 at the First Mennonite Church, Herbert, Saskatchewan, and in the following year married Susan at this same church. To support his new family Abe began selling door-to-door in the surrounding farming communities. Before long he became well known at selling magazine subscriptions, vacuum cleaners, and Watkins products. Under the mentorship of Abe's father-in-law Henry Harder, who was the proprietor of the dry goods store in the nearby town of Morse, Abe began to play a larger role. This experience would lay the groundwork for Abe's future success as a salesman. 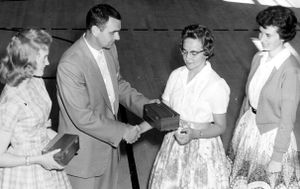 During World War II Abe was a Conscientious Objector and served on Vancouver Island, BC in the logging camps. Following that, he worked at the Swifts Packing Plant in Moose Jaw, Saskatchewan. In 1948, due to the sudden illness of Susan's father Henry, Abram and Susan moved back to Herbert, and Abe took over management of the dry goods store.

In 1950, Abram and Susan decided to make a new start and moved to Clearbrook, British Columbia. Abe found work as a salesman at Sears Furniture. They joined the West Abbotsford Mennonite Church, and Abram began to serve by conducting the Junior Choir along with Susan at the piano, and leading the youth group. In 1954, Abram and Susan decided that they would start their own business; Abe's Furniture opened on South Fraser Way in 1954.

While Abram was busy raising a family, managing his business, and serving in his church, he still found time to play a role in the civic life of the community. He served on various boards and committees, including the Clearbrook Chamber of Commerce and the Mennonite Educational Institute (MEI). Abe was also an active member in Kinsmen. He enjoyed working with the youth of the community by sponsoring and supplying uniforms for local sports teams. An annual highlight for Abe was the annual Clearbrook parade, in which he would participate by riding his horse, Starfire, or dress up as a clown and offer candy to the children.

Being a consummate salesman, Abram found ways to drum up business, and at the same time bring the community together. The pancake breakfasts on Saturday morning in front of his store became legendary. An idea that was dear to his heart was giving each young lady a small cedar box upon her graduation from MEI. Abe's generosity and love for people was also exhibited in his willingness to serve those in need. He offered to move pastors to and from their new assignments with his delivery truck, regardless of distance or time, taking his family along whenever possible. Time spent or distance traveled were never an issue.

In retirement Abram continued to serve. While residing in Evergreen Village, he served as manager. After his move to Menno Terrace East, he conducted a seniors’ choir in the residence. Abe was a generous man who enjoyed serving others. The moniker that he is fondly remembered by was well earned - "Honest Abe."