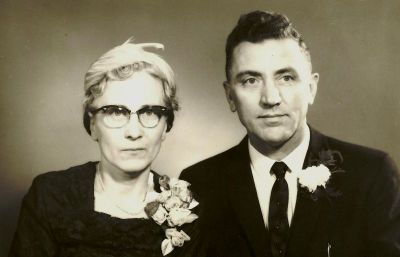 John A. and Nettie Toews, 1960
Source: Herta Loewen, Abbotsford, BC

John’s family fled the Soviet Union in 1926 and settled in Namaka, Alberta. Later, Toews attended a variety of institutions including the Coaldale Bible Institute, the Prophetic Bible Institute led by William Aberhard, Tabor College (BTh, 1940), and the University of Minnesota (PhD, 1964).

Most of Toews' life was spent in a teaching career, especially at the Mennonite Brethren Bible College (1947-1967; 1976-1979) where he served as president for seven years (1956-1963). He also taught at Trinity Western College in British Columbia, served three years in a pastoral ministry in British Columbia, and spent shorter periods of teaching and ministry in Europe and South America. He served his denomination in a variety of committees and leadership roles and at the time of his death was moderator of the General Conference of Mennonite Brethren Churches. Toews had a special concern for cooperation with other Mennonite bodies, which was expressed by active involvement in the Mennonite World Conference, Mennonite Central Committee, and in other activities. He was the author of a number of books and numerous articles, many of which focused on Anabaptist and Mennonite concerns, including a definitive history of his own denomination (1975). He was probably the most effective interpreter and spokesman for the Anabaptist vision in the Mennonite Brethren Church in his generation.

Nafziger, Elfrieda Toews. A Man of his Word: a Biography of John A. Toews. Winnipeg: Centre for Mennonite Brethren Studies, 1992. Available in full electronic text at: https://archive.org/details/AManOfHisWordJAToewsOCRopt

Toews, John A. People of the Way: Selected Essays and Addresses by John A. Toews, ed. by Abe J. Dueck, Herbert Giesbrecht, and Allen R. Guenther. Winnipeg: Historical Committee of the Board of Higher Education, Canadian Conference of Mennonite Brethren Churches, 1981.

Toews, John A. A History of the Mennonite Brethren Church: Pilgrims and Pioneers, ed. by A. J. Klassen. Fresno, CA: Mennonite Brethren Board of Christian Literature, 1975. Available in full electronic text at: https://archive.org/details/AHistoryOfTheMennoniteBrethrenChurch.

Toews, John A. True Nonresistance through Christ: A Study of Biblical Principles. Winnipeg: Mennonite Brethren Board of General Welfare and Public Relations, 1955.