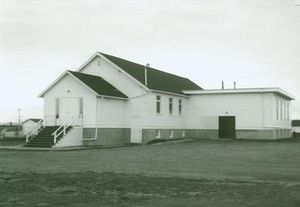 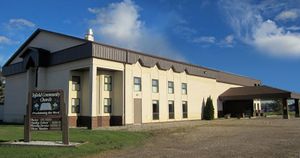 The Tofield Mennonite congregation at Tofield, Alberta began services in 1929, gathering in homes and rented facilities. The congregation formally organized on 15 June 1936. David A. Heidebrecht is considered the founding leader of the group having served as minister beginning in 1929 and elder from 1942. The congregation originated through immigration from the Soviet Union.

Tofield was originally known as Schoenwieser Mennonite Gemeinde zu Tofield or the Schönseer Mennonite Church, and changed its name to Tofield Mennonite Church in 1960. The congregation first met in a home purchased on 18 November 1934, known as "The Old House." Construction began on a sanctuary in May 1937 and the first service was held in June 1937. The building was dedicated on 25 July 1937. A 30 foot addition was added in 1950 and an education wing was constructed in 1974. A fellowship hall was build in 1991-92 and dedicated on 13 September 1992. The last service held in the original sanctuary was on 13 October 2002 and the building was decommissioned on 17 August 2003 and demolished on 24 June 2004. Services moved to the fellowship hall until a new sanctuary was constructed in 2006-07. The first service was held on 6 May 2007 and dedicated on 27 May 2007.

In 1958 the leader was Johann Neufeld, and the assisting ministers were David Boese, Abraham Epp, Peter Regehr, Gerhard Franz, and Abraham Heidebrecht. The transition from German to English occurred in the 1950s.

In a letter dated 4 February 2015 the church informed the area conference that it had voted 94% in favor of withdrawing from Mennonite Church Alberta, citing differences with the area conference regarding the view of Scripture, God, mankind, sin, and salvation. The congregation later changed its name to Tofield Community Church.