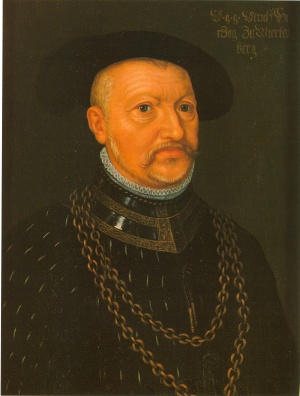 Ulrich was badly reared, became independent too soon, was unhappily married to Sabine of Bavaria (daughter of Albert IV, Duke of Bavaria), compensated himself by living in splendor, fell into debt that required increased taxes, against which Poor Conrad in the Remstal revolted, and was compelled to accept the terms of the very humiliating treaty of Tübingen. The murder of the knight Hans von Hutten (the husband of his mistress) in the forest in 1515, the flight of his wife, the violence with which he attached the imperial city of Reutlingen to Württemberg, stirred up the nobility, the dukes of Bavaria, and the Swabian League against him. In 1519 he was driven from his domain by the Swabian League, who sold it to Emperor Charles V, who in turn gave it to his brother Ferdinand. While in Switzerland Ulrich was won to the Protestant Reformation by Hartmut von Kronberg and Oecolampadius.

After several attempts to regain his lands, completely impoverished, Ulrich fled to Philipp of Hesse, who in the victory of Lauffen on 13 May 1534, restored to him his hereditary lands. But in the treaty of Kaaden, Ulrich had to acknowledge Austria's sovereignty. In gratitude to God Ulrich introduced the Reformation, and to that end called Erhard Schnepf for the region below the Staig, and Ambrose Blarer for the region above the Staig.

The treaty of Kaaden compelled the duke to adopt measures against the Anabaptists. On 18 June 1535, he issued the first Anabaptist decree concerning persons who recanted, and on 22 May a mandate ordering the arrest of native Anabaptists as well as those who came in from the outside. In 1536 he demanded an official opinion of the Tübingen jurists and theologians. The jurists replied that according to canonical law death was the penalty for rebaptism; nevertheless the duke had the right to exercise lenience. The theologians, recognizing the unfeigned simplicity, the zeal, the good appearance of the life of the Anabaptists in contrast to the wild, bold, and wicked life of the populace, earnestly opposed the death penalty and all corporal punishment, and recommended for the leaders and dangerous persons a term in the tower, and after release the wearing of a wooden placard depicting a wolf, a snake, or some other obnoxious beast, exclusion from all meetings, inns, weddings, and as a final punishment, expulsion from the country. Thereupon the duke issued a new regulation requiring the arrest of all Anabaptists and a close cross-examination, and defining the treatment of those who were pardoned. On the whole the Anabaptists were treated with lenience under Ulrich.

Following his defeat in the Smalkaldic War, Ulrich was compelled to humiliate himself before the emperor, pay a severe indemnity, permit his fortresses Asperg, Schorndorf, and Kirchheim to be occupied by Spanish troops, and to submit to the Interim, while Ferdinand threatened him with a court action on a charge of disloyalty as a subject; his death circumvented this misfortune. His difficulties and his return to Protestantism moderated the character of the prince and made him popular.