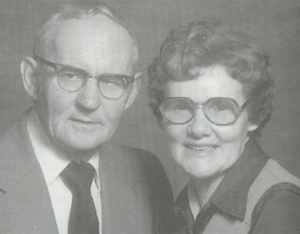 Peter moved to Manitoba, Canada at the age of nine in 1926 with his parents, eventually settling in Coaldale, Alberta in 1928. Peter grew up farming before becoming a Conscientious Objector during World War II, when he worked in various logging camps throughout British Columbia. As a result of his alternative service, Peter became an advocate for an ongoing peace witness, a conviction he modeled with his living.

After his return from alternate service Peter became Sunday school superintendent in his home congregation, Coaldale Mennonite Church. Peter had taken some correspondence courses with Moody Bible Institute of Chicago, but knew he needed further education. Peter chose to study at Menno Bible Institute in Didsbury from 1946 until graduation in 1948. He became a minister of the gospel in 1947 in Coaldale and he and Margaret were ordained as a ministerial couple in April 1949. During their time at Coaldale, Peter also attended Canadian Mennonite Bible College for one semester. Peter’s ministry at Coaldale came to a end in 1955, when he was encouraged to begin an English language congregation in Calgary.

Peter and Margaret started the North Hill (now Foothills) Mennonite Church in Calgary, serving from January 1956 until July 1962. Peter also served as secretary of the Conference of Mennonites in Alberta for a number of years. The Ungers then served at Grace Mennonite Church in Brandon from August 1962 until July 1968. After one year of studies at Mennonite Biblical Seminary in Elkhart, Indiana, they ministered at Chilliwack Mennonite Church from July 1969 until July 1972. He then served as chaplain at the Menno Home and Hospital in Abbotsford until retirement in December 1983. He considered these years among the most cherished in all his years of pastoral duties.

During his retirement years he continued to teach and preach at Eden Mennonite Church and other nearby congregations. When he moved to Menno Place as a resident, he assisted the chaplain by continuing to visit fellow residents, leading Bible studies, and singing in a resident choir. Gardening and grounds maintenance also became a consuming passion right to the end of his life.