In the division of 1847, minister Joseph Schantz and almost all the members followed John H. Oberholtzer into the new conference. In 1857 another division occurred when minister William Gehman and 23 members left Upper Milford and organized a church in Zionsville, becoming known as the Evangelical Mennonites, later the Mennonite Brethren in Christ Church, and eventually the Bible Fellowship Church after 1959.

The Upper Milford church has also at times been linked with other congregations through shared pastoral leadership. From 1885 to 1905, ministry was shared with Hereford Mennonite Church in Bally. From 1905 to 1948, Upper Milford shared pastoral leadership with First Mennonite Church of Allentown. During the time of this association the pastor of the two churches lived in Allentown. Norman Schantz described the pastor’s trips to Upper Milford as follows: “There were very few automobiles in use at that time. In order to get to Zionsville he took the trolley to East Macungie. There he rented a horse and buggy, traveling south on King’s Highway to deliver the King’s message to the sinners at the Upper Milford Church.” 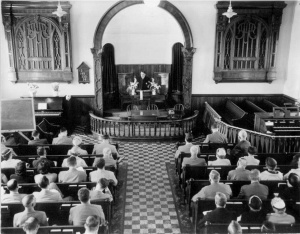 There were many significant events at Upper Milford during the years of association with Allentown. One was the transition from German-language worship services to English on 4 January 1930. The first Young People’s Society was organized in 1912. It was decided at the 1915 annual meeting to have individual communion cups instead of the common cup. The first Community Lenten Services in the Zionsville area were held in 1935. Three were held that year, one in each of the participating churches—Old Zionsville Reformed Church, Zion’s Evangelical Lutheran Church and Upper Milford Mennonite Church. Lenten services have continued; in 2010 there were six area churches participating. The fifth joint Conference of Mennonites, Schwenkfelders, Brethren and Friends was held at Upper Milford on 10 July 1939. 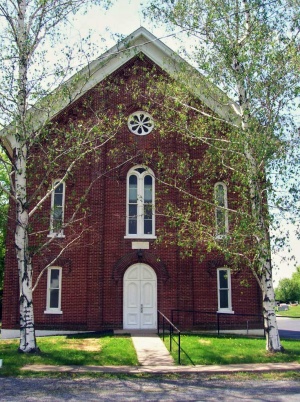 Upper Milford Mennonite Church in 2007.
Photo by Richard A. Moyer.

In 1876 the congregation razed the old stone building and built a new brick church. The building had some features that were new for Mennonites. It was a two-story building, with the first floor accommodating the Sunday School program and the sanctuary on the upper floor, after the pattern of many Protestant churches of the day. The sanctuary included a raised platform for a pipe organ. However, when William G. Moyer bought a bell and donated it to the congregation the brothers and sisters thought it was too modern and did not accept it. He then erected the bell on his farm and rang it on Sunday morning before going to church. He later donated a two manual Estey Organ to the church.

Music has always been an important part of the church’s worship. During the early years singing was unaccompanied. No doubt this practice continued until 1876. Organists were appointed from among the members almost without exception. Twenty-five organists have served from 1876 to 2010. The annual Christmas Candlelight Service (begun in 1976 by two former organists) and Music Sunday in July have been musical events in either vocal or instrumental form. Both services have included the choir, men’s choir (Menno Knights), other church musicians and congregational participation. A new Fritzsche pipe organ installed in 1932 replaced a 1922 Durner pipe organ. The Fritzsche organ was replaced by a new Allen organ in 1965.

The Upper Milford Mennonite Church Preschool was started in the fall of 1971 with 24 children in two classes: three- and four-year-olds. The number of children grew in the ensuing years and the number of classes doubled. The school continued for nearly 20 years. For many years Upper Milford has hosted a Ten Thousand Villages sale to benefit Mennonite Central Committee. In 2010 this was a two-day event: Friday and Saturday in early November. A Neighborhood Breakfast has also been held twice a year, spring and fall, for the purpose of getting to know the congregation's neighbors. Proceeds benefited various charities. In 2009 the congregation joined five local churches to start a food bank housed in the neighboring Lutheran Church. Cooperation with other community churches has included joint Good Friday and Thanksgiving services, Vacation Bible School, World Day of Prayer and pulpit exchange.

In 1735 the Lutherans built a log school in Dillingersville, near Zionsville. It was a church school for three denominations: the Lutheran, Reformed, and Mennonite faiths who settled in the area. In 1799 the Upper Milford congregation entered into an association of the three denominations to run the school together. This venture began a spirit of cooperation that continued in 2010. A pilgrimage to the Dillingersville School has been held annually the last weekend on one or both days in June. The three congregations have held a joint worship service on Sunday and other special programs.

Upper Milford Mennonite Church (General Conference Mennonite [GCM]), located near Zionsville, 5 miles southwest of Emmaus, Upper Milford Township, Lehigh County, Pennsylvania, was first affiliated with the Franconia Mennonite Conference (Mennonite Church [MC]), but since 1847 has been in the Eastern District Conference (GCM). The congregation was established about 1735, and a meetinghouse was built in 1740. In 1816 the original log building, which had been used for both church and school purposes, was displaced by a stone meetinghouse, which was in turn enlarged and renovated in 1843. In the division of 1847 the minister, Joseph Schantz, and almost all the members followed John H. Oberholtzer into the new conference. In 1876 the congregation razed the stone building and built a new brick church. William Gehman, ordained by lot as minister here in 1849, led a division in 1857 and became the founder of the Evangelical Mennonites. In 1895 the membership was 96; in 1936 it was 164; in 1958 it was 168, with Burton G. Yost as pastor. Other ministers who have served were Uriah Shelly, C. H. A. van der Smissen, A. S. Shelly, W. S. Gottschall, E. S. Shelly, V. B. Boyer, and H. G. Nyce. -- Burton Yost