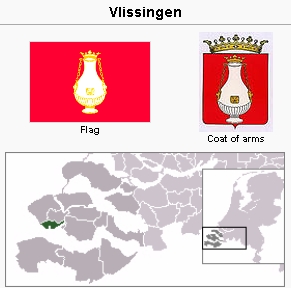 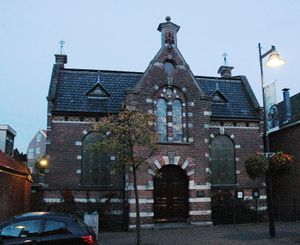 Vlissingen, a seaport on the island of Walcheren (coordinates: 51° 27′ 0″ N, 3° 35′ 0″ E) in the Dutch province of Zeeland (1955 population, 26,000; 200 Mennonites; 2007 population, 45,015). Anabaptism seems to have arisen here somewhat later than in the other towns of Walcheren like Middelburg and Veere; not until 1567 is there information about it. In 1567 Hendrick Alewijnsz of Vlissingen traveled about preaching; arrested in 1568, he died as a martyr at Middelburg in 1569. He also preached in the neigh­borhood of Vlissingen. That there was then a con­gregation at Vlissingen may be concluded from a letter written by the martyr Hans Marijnsz van Oosten of Vlissingen, who was executed with Hendrik Alewijnsz in 1569. On the same day an­other martyr, Gerrit Duynherder, probably also from Vlissingen, was put to death. Dirk Meeuwesz of Vlissingen was apprehended in 1570 and burned at the stake there in 1571. He is the only martyr who died in Vlissingen. From ca. 1575 Mennonites of Flanders, Belgium, came to Vlissin­gen, where it was safer, for baptism. One of the elders from Flanders who performed baptisms at Vlissingen was Hans Busschaert, ca. 1587. About this time or shortly before, the congregation was greatly increased by the arrival of Mennonite refugees from Flanders. Thus the congregation was mostly of Flemish descent, and consequently sided with the Flemish branch. According to Faukelius there was ca. 1600 also a congregation of the Naeldemansvolk, of which Cornelis (de) Compas(maker) was the leader; they were also called "Compasmennisten." This account obviously refers to a Waterlander congregation at Vlissingen, concerning which there is no further information.

The Flemish church was always small (exact fig­ures before ca. 1638 not available); in the 17th century the following families, all descendants of refugees from Flanders, are found among the members: van Daelle (Dale), Fa(c)k, Geleynsz, van Houteryve (Outrijve), Ta(c)k, and Willeboorts. Besides the Waterlander and Flemish congregations in the early 17th century there was at Vlissingen also an Old Flemish congregation which in 1602 separated from the Flemish church; it is also called the Huiskopers or Voetwasschers church. This small group disappeared shortly after 1640, probably by merging with the Flemish.

About 1620 the number of Mennonites at Vlis­singen can be estimated at ca. 400. They seem not to have encountered special difficulties from the Re­formed magistrates: in 1589 an agreement was made to exempt the Mennonites from military service upon payment of a certain sum by the congregation. During the 17th century Mennonites had to have their marriages performed by the city officials after announcement in the Reformed church, but from 1638 their marriages could be performed in their own meetinghouse. The Mennonites of Vlissingen could meet rather freely. At first meetings were held in private homes; when the membership in­creased in the early 17th century a house near the Reformed church was used as a meetinghouse. In 1641 a house on the Peperdijk was remodeled into a church (the "new church" mentioned in 1668 prob­ably refers to some alteration of the Peperdijk meet­inghouse). This meetinghouse was very plain, with backless benches and without a pulpit. It was re­modeled in 1723, 1744, 1848, and 1859. In 1744 it obtained a pulpit; in 1848 a parlor organ. In 1859 the pulpit was replaced by a simple platform. This meetinghouse was used until 1889.

In 1632 the preacher Oillaert Willeboorts and the deacons Per Jacob Pennen (the name obviously mutilated) and Lieven Marijnsz signed the Dordrecht Confession for Vlissingen. During the Lammerenkrijgh after the Lamist-Zonist schism Vlissingen, influenced by its elder Pieter Baert, sided with the progressive Lamists.

The congregation of Vlissingen like that of Mid­deiburg has an important and considerable archives, now found in the Provincial Zeeland Archives at Middeiburg. Records of members and other Vlis­singen church books are preserved since 1665. The congregation contributed liberally to the Fonds voor Buitenlandsche Nooden (Dutch Relief Fund for Foreign Needs) and to other needs also of non-Mennonites.

There is a complete list of ministers since 1628. Until 1689 they served without remuneration; in this year it was decided to pay the preacher a salary of 300 Dutch guilders, soon considerably raised.

After the death of Gerlof Rekker (1809) the membership being rather small and finances insufficient, the congregation of Vlissingen was served by the ministers of Middelburg until 1871. In this year Vlissingen again had a pastor of its own; in 1884 a union was again made with Middelburg, whose pastor served until 1899; then a union was made with Goes, which lasted un­til 1919, pastor T. H. Siemelink, who served in the combination Goes-Vlissingen 1908-1919, from 1919 serving only at Vlissingen until he retired in 1927.

The old meetinghouse of 1641 on the Peperdijk was sold in 1889 to a Reformed group: a new church was dedicated on 6 July 1890, by Pastor Tj. Kielstra of Middelburg. This church, furnished with a new organ in 1908, was destroyed during World War II on 24 April 1942. On 20 February 1949, a new meetinghouse on Vrijdomsweg 1 (architect P. Feenstra) was dedicated by Miss de Boer, pastor of the congregation.  Church activities in 1958 included a ladies' circle, youth groups, Sunday school for children.

Braght, Thieleman J. van. The Bloody Theatre or Martyrs' Mirror of the Defenseless Christians Who Baptized Only upon Confession of Faith and Who Suffered and Died for the Testimony of Jesus Their Saviour . . . to the Year A.D. 1660. Scottdale, PA: Herald Press, 1951.

Cuperns J. and J. de Loos, "History of the Congregation." Manu­script in the Archives of the congregation.