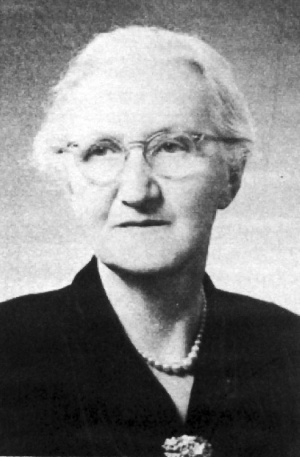 Anna Vogt, the first Mennonite Kindergarten teacher, was born 16 September 1883 in the village of Schönweise, part of the Chortitza Colony in South Russia. Anna was one of nine children born to minister Andreas Vogt (1854-1914) and Aganetha (Block) Vogt (1857-1930), and was considered a sickly child. She attended the village school but did not continue her formal education at that point because she was needed at home to help in the family dry goods store and in the household. Anna was baptized in 1902, at which time she became a member of the Mennonite Church.

In 1912 Anna Vogt was given the opportunity to study in Germany. Her older sister, Maria Vogt, had persuaded their father to let her study nursing in Germany and this prepared the way for Anna. With the financial assistance of a wealthy mill owner from a neighboring village, Anna was able to attend the famous Berlin "Pastalozzi-Fröbel-Haus," an institution which specialized in early childhood education. It was difficult for Anna to return to formal studies but after two years of hard work she graduated with a teaching certificate in the summer of 1914. Just one month before World War I began in Europe, Anna and her sister Maria returned home. Later that fall her father died. For the next five years Anna was employed by widower J. J. Thiessen of Dnipropetrovsk to tutor and care for his four children. She then opened her first kindergarten in the village of Nieder-Chortitza, which at one point had over 100 children enrolled. Civil war forced Anna to move to other villages and for a short time she taught at the new teacher's training institution in Nikolaipol.

Anna Vogt came to Canada in July 1923 with her mother, six siblings and their families. They settled in Steinbach, Manitoba where Anna again opened a Kindergarten--a private German Language Nursery School/Kindergarten. Her school was open Monday to Friday from 9:30 until 12:00 for children ages three to six. In 1938 Anna was asked to start teaching in English which she was unwilling to do. That year she moved to Winnipeg where she taught children in the German-speaking community of North Kildonan until 1966.

Anna Vogt died at the age of 91 in 1975 at Bethania Personal Care Home which had been founded in Winnipeg by her sister Maria Vogt and brother Abram Vogt. Anna was a warm and loving person who had used her expertise in early childhood education to enrich the lives of hundreds of children who attended her schools in Russia and Canada.