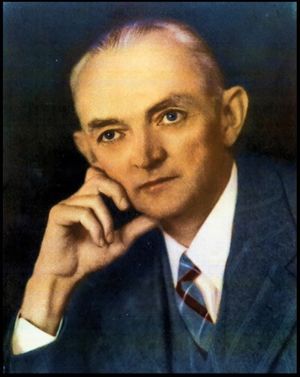 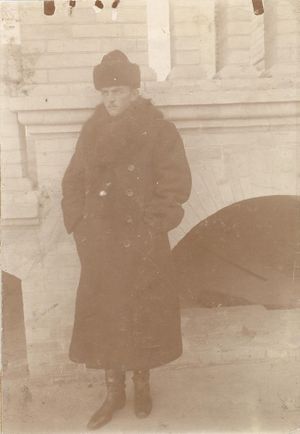 Peter Wall: entrepreneur and land developer of the Niagara Peninsula; born 19 February 1894 in the Ekaterinoslav Province, South Russia as the oldest son to Jacob P. Wall (1870-1922) and Maria (Albrecht) Wall (1867-1925). He was baptized at age 20 and was part of the Schoensee Mennonite Church in Molotschna. Peter Wall married Nina Schtschitowka (1902-1989) in May 1922 in Halbstadt, Molotschna, South Russia. They immigrated to Canada in 1924. Peter and Nina Wall had five children together. Peter Wall died 26 March 1968 in St. Catharines, Ontario, and is buried in the Niagara Lake Shore Cemetery.

Peter’s father, Jacob Wall had become a very wealthy estate owner near the Molotschna settlement, owning ten thousand acres adjacent to the even larger Wintergreen estate. He owned glass, flour, and paper mills, and he was an investor in and president of the Tokmak Railroad completed in 1910.

Peter Wall served six and a half years in the Russian Army through World War I and served in the White Army during the Russian Revolution where he reached the rank of colonel. Several times Wall family members were imprisoned, and twice Peter was almost executed. The Jacob Wall family lost its property in the chaos of the revolution and its aftermath. Peter and his brother, John, escaped Russia under false identity and came to Canada with their widowed mother and other siblings. After their mother died and several consecutive crop failures, the Wall brothers moved to Ontario in December 1927.

After working for several years, the four brothers were able to purchase a foreclosed farm in Vineland in 1930 for a down payment of one dollar. The brothers farmed peaches, cherries and grapes, which initiated Peter to the possibilities in local agriculture. Peter gradually became involved in land development and helped many Mennonite families to get started in fruit farming. He began by helping a few farmers get land in the Vineland area.

Peter Wall worked closely with the Toronto-based real estate firm Home Smith Company, purchasing foreclosed agricultural properties suitable for growing fruit and subdividing them into smaller 10-15 acre plots. He started his development in 1933 when he bought a 110 acre wheat farm on the outskirts of Virgil. He sold not only to Mennonites, but also to other immigrants settling in the area. By 1937 fifty families had purchased land in the Virgil area, many from Peter Wall, and begun to plant fruit orchards and vegetable crops.

In the absence of cold storage facilities in those days, great losses occurred due to rotting, especially when there was a glut in the market. A number of Mennonite farmers approached Peter urging him to establishing a cannery. Having become financially successful with his land development scheme, he decided to invest his resources in a new venture. Soliciting additional funds from the farmers at $100 a share, and with donated labour, a new canning factory was constructed in 1940 at the corner of Lakeshore Road and Creek Road, called the Niagara Canning Company. It processed and canned goods under the label caption, “Pride of Niagara.”

The Niagara Canning Company operated only eight years before going bankrupt in 1948 when markets in Great Britain for Canadian canned fruit suddenly collapsed. The bankruptcy had the effect of estranging the Wall family from the Mennonite community, although Peter Wall remained a member of the Niagara United Mennonite Church until his death. Peter Wall himself lost $70,000 in the canning factory failure.

In 1949 Peter Wall and his sons formed a real estate company in St. Catharines where the entrepreneur spirit continued.

Friesen, C. Alfred. Memoirs of the Virgil-Niagara Mennonites: History of the Mennonite Settlement in Niagara-on-the-Lake, 1934-84: 30, 108.