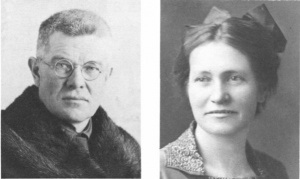 The Waterloo-Kitchener United Mennonite congregation originally consisted of some of the 875 immigrants that arrived in Waterloo from Russia on 19 July 1924. In June of 1925, fifty-eight of these people met to organize a new congregation -- the Mennonite Refugee Congregation of Ontario (Mennoniten Flüchtlingsgemeinde in Ontario) -- under the leadership of Jacob H. Janzen. On 15 August 1926, this name changed to the United Mennonite Church of Ontario and included members from central, southwestern and northern Ontario. In January 1929, this group was divided into three separate congregations: the Essex County UM Church in the southwest, the Reesor UM Church in the north and the Waterloo-Kitchener UM Church in central Ontario.

Initially the Waterloo-Kitchener congregation met in rented quarters on King Street North in Waterloo in a building where the Harmony Lunch restaurant is now located. In 1927 the congregation moved to 15 George St. in Waterloo, first renting and then in 1932, purchasing the former Presbyterian Church, for $4000, at this location. The church building was enlarged in 1952-53, a new foyer added in 1961, then modified to include a new organ in 1973, and an education wing added in 1974. 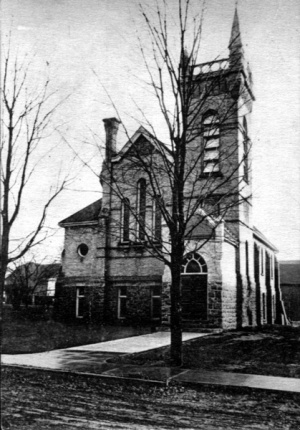 The church continued to play an important role in the lives of immigrants by welcoming another influx from Europe and South America from 1947 and continuing into the 1950s. To meet the needs of these newcomers, all worship services were conducted in the German language until the early 1950s. Separate services continued in both English and German until May 2012 when the German services ended. Music became an integral part of worship under the long directorship of Jacob H. Enns and continues to be important. Community outreach has taken several forms including the establishment and construction of the adjacent Waterloo Mennonite Homes (1980), community meals for seniors, support for the House of Friendship in caring for homeless men and the recent involvement at Parkwood Mennonite Home to expand into a new facility. On 5-7 October 1984 the church, along with Erb Street Mennonite Church, one of the original sponsors of the refugees, spearheaded the celebration of the 60th anniversary of the arrival of the first immigrants in Ontario.

The congregation's archives are located at the church and at the Mennonite Archives of Ontario.