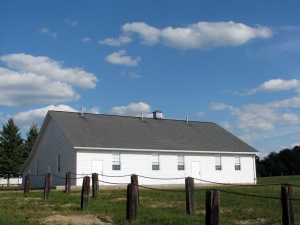 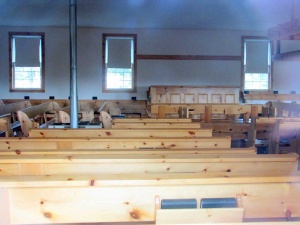 The Westdale meetinghouse stands with the women's gable end toward the road, which is somewhat unusual. It was also the first meetinghouse built with a cement floor underneath the pine floorboards. This was done to avoid using wood joists, which eventually deteriorate. It also meant lowering the floor so that there is only one small step at the doorway, making the meetinghouse more accessible for wheelchairs.

In 1997 there were 19 families in the Westdale district, and by 2004 this number had increased to 28. No accurate count of members is available for most of the history of the congregation because Old Order Mennonites think of themselves as members of the church at large and not just the immediate congregation. The Old Order also do not see the quantity of members as indicative of the congregation's importance.  When people move from one geographical area to another, they automatically "belong to" the congregation whose meetinghouse is closest to their home. No formal membership transfer takes place from the former location.

Information from the church.