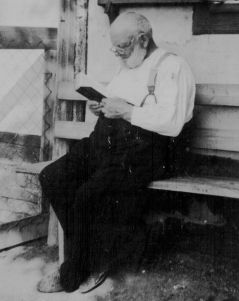 For the first part of their married life, Johann and Elise lived on a farm in Sparrau, a remote outpost of the village of Preussisch Königsdorf. He was an efficient farmer. Through his economical, skillful farming and his prudent Mennonite upbringing, he saved enough money to buy several small farms in the neighborhood from retiring or bankrupt farmers and soon had amassed a rather large estate. He let the former owners of the farms he had purchased live in their houses if they wanted to stay and cared for them if they were elderly or sick. He just wanted to cultivate their land.

Johann was an unpretentious man and lived a very modest, almost frugal lifestyle with his own family. However, he was generous towards others, especially if it had to do with building the kingdom of God. He donated two homes to the Friedenshort foundation, established by Sister Eva von Tiele-Winkler. Two of his daughters, Helene and Anna, were educated and trained there as Deaconesses. One of the homes, the Tannenhaus, opposite the Mennonite Church in Preussisch Rosengart, was established as an orphanage and housed mentally challenged children; and the other, the Lindenhaus, became a children’s home. It later changed its function and was set up as a seniors’ home. His daughter Helene initially worked there. Together with Count Hohendorf he established and maintained Sorgenfrei (without worries), a home for orphans and unwanted children near the village of Sorgenort. His daughter Anna was the matron of this home. Sorgenfrei, at the banks of the river Sorge, became a favorite holiday stop for the family. Schwester (Sister) Anna was an efficient, loving and joyful housemother and hostess.

In his later years "Vater Wiehler," as he was called, bought a smaller farm which was nearer to the Mennonite Church and left his Sparrau estate to his oldest son, Richard, and his family of 13 children. His youngest son, Heinrich, worked with him and later took over the farming. Their daughter Helene left the Lindenhaus and moved in with her parents to care for her mother, who had lost her eyesight. The farm in Preussisch Rosengart, known as Die Grüne Aue (the green pasture), was always open for people with physical or spiritual needs. Helene, known as “Tante Lenchen,” was a very gracious host.

Every once in a while Wiehler would drive with his horse and wagon, loaded with a bag of flower, potatoes, vegetables and meat packages, to the poor area of the village to visit sick or poverty-stricken people and bring to them groceries, give counsel and admonish those who had become alcoholics and mistreated their wives and children. He was known in the area as "Das liebe Gottchen" (the loving God).

Together with Adolf Lemke, the father-in-law of his daughter Selma, he founded an interdenominational pietistic fellowship in Thiergarth, a branch of the Landeskirchliche Gemeinschaft. Both of them served at the beginning as lay preachers. Later they appointed a fulltime preacher; the first one was Abraham Harder, former headmaster of an orphanage in Grossweide in the Ukraine, who had fled from Russia to Germany after the Russian revolution.

At the end of the war, Heinrich was drafted into the German army and Johann, the 84-year-old farmer, had to manage his farm again.

All this came to an end when, in January 1945, the Russian army invaded the village of Preussisch Rosengart. Russian soldiers, assuming the Wiehlers had hidden German soldiers in their house, set the house on fire. Johann Wiehler, his wife Elise, her brother Hermann, who lived with them, and their daughter Helene all died in the flames of their burning house.