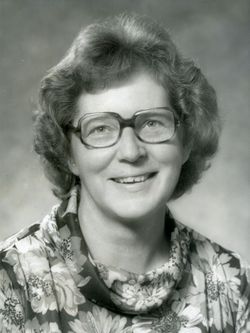 Anna Louise "Ann" Klassen Wiens: missionary to Paraguay; born 9 November 1930 in Winnipeg, Manitoba, Canada, to Johann P. (14 November 1902-1 September 1979) and Gertrude (Wall) Klassen (9 November 1905-12 July 1987). She was the third of six children in the family. Ann served for 18 years as a missionary in Yalve Sanga, Paraguay, before marrying Peter Wiens of Filadelfia in the Chaco on 28 September 1979. Ann died of cancer on 23 June 1988 and was buried under a tree in Yalve Sanga, Paraguay.

The family of Anna Louise (or Anneliese) farmed in Manitoba at Culross, Newton, and Poplar Point, while Ann attended the Mennonite schools in Gretna and Winnipeg. At the age of thirteen, Ann became a Christian and was later baptized in Newton, taking another step in her early commitment to becoming a missionary. Following high school, she graduated from the Winkler Bible Institute and then the Mennonite Brethren Bible College in Winnipeg. Next came nursing studies at the Grace Hospital in Winnipeg and then further education at Tabor College in Hillsboro, Kansas.

In 1960, Ann applied to work with Mennonite Brethren Missions and was accepted for service in Paraguay at Yalve Sanga, Chaco. Her task was to use her training in the area of nursing and later to serve as a social worker among the women of the indigenous tribes, jobs which she did faithfully for the next eighteen years, with the exception of a brief assignment at Bethany Bible College in Hepburn, Saskatchewan. During that year (1971–1972), she served in various roles, including as dean of women and campus nurse.

Klassen’s main job in Paraguay was to work with the Lengua (now called Enlhet) and Chulupi (now Nivacle) people. She had a strong concern for the indigenous women of the region, and she was an advocate for projects that helped the whole family, including raising money to bring electricity to Yalve Sanga. However, reaching out to other groups was also part of her work. A few years before Ann arrived in Paraguay, a missionary named Kornelius Isaak had been killed by a member of the Ayoreo (Moro) tribe. Together with other missionaries, Ann tried made contact with several tribesmen and even managed to trade her pearl necklace for a spear much like the one that had been used to kill the missionary. She took the spear back to Canada with her and often used it to illustrate her stories about South America.

On 28 September 1979, Ann Klassen entered a new era of her life in Paraguay when she married Peter Wiens, a minister from Filadelfia in the Chaco. Over the next years, she served as the director of nursing in the Filadelfia hospital and later set up the town’s first nursing home, as well as frequently inviting her stepchildren to share meals together.

At the beginning of May 1988, Ann was diagnosed with cancer. She died of her illness in June 1988 and was buried under a bottle tree in Yalve Sanga, the community where she had served for so many years. The funeral took place on 25 June in the Filadelfia Mennonite Church, with a memorial service on July 3 at the Community Fellowship Church in Newton.

Ann Klassen Wiens’s life was characterized by dedication, friendliness, and advocacy for the people whom she served. Long after her death, the people of Yalve Sanga still remembered the worker who had lived and laughed with them.

Janzen, A. E. The Moro’s Spear. Hillsboro, KS: Board of Missions of the Conference of the Mennonite Brethren Church, 1962.

Klassen, Arli. "Some of the Stories I Heard About Ann Klassen, January 22/23, 2011, Paraguay." Unpublished manuscript.