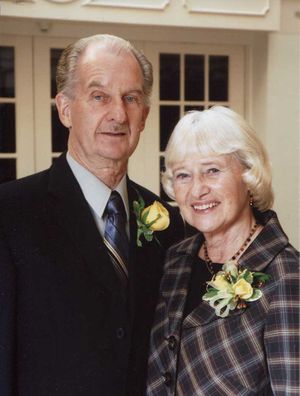 In 1952 when Jake was just 17, his mother died, after which he and his father moved to Kitchener, Ontario. He worked briefly for his brother’s construction company and then began a career at the Waterloo Trust where he eventually became Manager of the Mortgage Department.

Throughout his life, Jake Willms took his relationship with God very seriously and lived out his faith with integrity in whatever context he found himself. He was a lifelong member of Kitchener Mennonite Brethren Church (KMB) where he served for many years as moderator with quiet wisdom and diligence. Jake and Rita had a heart for young people and were active as youth leaders. Jake also served in the Ontario Mennonite Brethren Conference and for many years was on the board of Camp Crossroads, the Ontario Conference camp in Torrance, Ontario. Jake and Rita spent many years at the camp serving in various capacities. They were a good team and supported each other’s goals and endeavors.

Music was the bedrock of Jake’s life. He used his musical gifts in the ministries of the Kitchener Mennonite Brethren Church by singing in church choirs and in the Sacred Song Quartet. He also began the very successful Reach Out/Celebration Youth choir, which drew in young people from KMB where it was based, as well as youth from other churches and the community. Their enthusiastic singing was enjoyed in many churches across Ontario. They performed as far away as Winnipeg, Manitoba and Banff, Alberta. Later Jake started the Jubilation Male Chorus which allowed men from many community congregations to gather at KMB and enjoy singing together. Their programs of sacred songs were also well received in many different churches throughout Ontario. While working at the university, Jake was known for gathering staff together and enthusiastically leading them in an annual Christmas carol sing, an anticipated tradition. He also enjoyed singing in the musicals produced by the Gilbert and Sullivan Society of Kitchener-Waterloo.

Jake Willms was diagnosed with vascular parkinsonism in 2010. His strength and vitality slowly diminished, calling for great courage, faith and perseverance on the part of both Jake and Rita.

Throughout his life, Jake was loyal, devoted and faithful to his family, the church, his workplace and the community. At the end of his life he could truly say, as in the words of his favorite hymn, “It is well with my soul”.