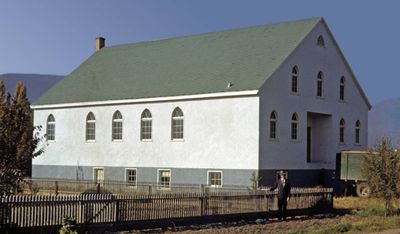 When Mennonite families began to arrive in Kelowna, British Columbia in 1940 by way of immigration from the Canadian Prairies and Soviet Union, most of them decided to attend Grace Baptist Church. Soon, however, these families desired a church of their own.  In 1947, meetings were held to discuss the possibility of starting a new church, and a leadership team was elected for Sunday worship services. On 6 June 1947, those gathered at the home of Mr. and Mrs. George Siemens officially established Kelowna Mennonite Brethren Church with Rev. John J. Unger as their pastor -- 32 of the 37 people present were confirmed as members. The congregation joined the British Columbia Conference of Mennonite Brethren Churches in the same year. Services were initially held at Herman Goerzen's home and later at various rented halls throughout the city.

In 1966, the congregation outgrew their building, and a new building, which was able to seat 430 people, was built on the corner of Vineland and Bernard. This building served the congregation for 21½ years until they again needed a larger structure to accommodate the projected growth of the church. Construction commenced in November 1987 at their current location on Highway 33, and dedication of the new completed building able to seat 500 people was held in October 1988. It was also at this time that the church changed its name to Willow Park Church.

The congregation continued to grow to the extent that in 1992 it required two services to accommodate the 550-600 people who attended. In September 1995, Willow Park planted a church locally called Garden Valley Community Church.

After 1997 the church established two additional services on Saturday night. Instead of expanding the sanctuary or relocating, the church identified where church members resided in Kelowna and where there were few or no nearby evangelical churches. The southern area of the city was identified as the potential location of a satellite campus, and 130 congregational members agreed to move to the new site. On Thanksgiving Sunday of 2003, the congregation launched the first satellite church campus, Willow Park South.

In 2008 a fifth location was established in the Glenmore area and called The Abbey.