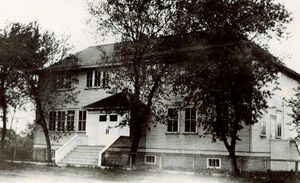 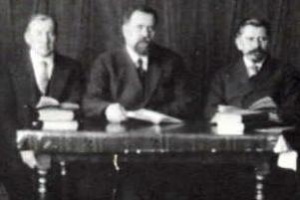 The Winkler Bible School began in the autumn of 1925. It was the continuation of an effort of three Russian Mennonite Brethren teachers who had taught in the Tschongraw Bible School in the Crimea until the spring of 1924, namely Abraham H. Unruh (1878-1961), Gerhard J. Reimer (1885-1970), and Johann G. Wiens (1874-1951). Thus it was the Russian Mennonite immigrants to Canada in the 1920s who began this institution with the leadership and guidance of Mennonites who were descendants of the Russian Mennonites coming to Manitoba in the 1870s. Prominent were the Kroeker family, with brothers Jacob and Abram and brother-in-law John B. Dyck. A. H. Unruh was the leader of this group and of the school until 1944.

During these first nineteen years the school was a private institution. Its leaders were mostly these teachers and a few local churchmen. In the autumn of 1944 the institution came under the jurisdiction of the Manitoba Mennonite Brethren Conference and remained so until its closing in the spring of 1997.

The educational focus of the Bible school remained the Bible throughout its history. It prepared students for local congregational work and mission work in North America and abroad. During the first private era it was a four-year program with a fifth year for those students wishing to specialize. This fifth year was dropped when it became a conference institution and Mennonite Brethren Bible College was started in Winnipeg. It became a three-year program in 1961 and a two-year program in 1968 with emphasis on the Bible, Christian education, and music.

Its graduates became leaders in many facets of the Mennonite Brethren world - in missions, congregational ministries, and other ministries such as camp work. Winkler Bible Camp was begun in 1949 by the school's faculty. The Africa Mission Society was formed by former students to support other of their fellow students in mission work in Africa. Direct student involvement in the life of the community throughout the study terms each year was fostered. They conducted educational services, visitation services to hospitals and senior citizens' homes, among others. Out-of-province tours as well as Manitoba tours were undertaken by students and staff to promote the school. The school published various periodicals over the years under the editorship of faculty members.

In the 1990s the school experienced declining enrollments. The factors for this were varied. The school closed in 1997 after 72 years of providing an educational experience for many youth, mostly Canadians, and in the end mostly Manitobans.