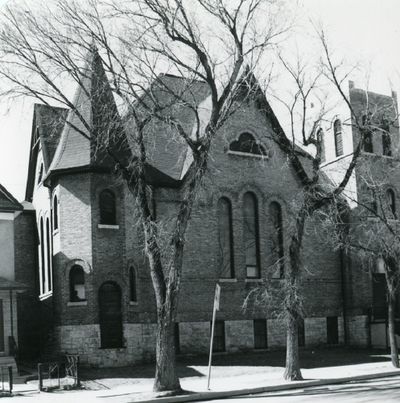 Winnipeg Central Mennonite Brethren (MB) Church traces its beginning to 1960 when the congregation known as the South End Mennonite Brethren Church in Winnipeg, which was located at 520 William Avenue since the early 1930s, decided to build a new church on Portage Avenue at Raglan Road. Winnipeg Central was established when 134 members of the South End expressed their desire to stay at the William Avenue Church as an MB congregation. Winnipeg Central MB Church held its first independent worship service on 25 September 1961 after the South End members moved into their new premises. David K. Duerksen is considered the founding leader of the group.

The congregation served the needs of newcomers from continental Europe by conducting services in German and English. At a congregational meeting on 22 March 1995 a vote to either merge with Elmwood MB Church or to relocate was taken. A majority chose to join Elmwood. The final worship service was held on 25 June 1995. Once the congregation dissolved, about 100 members transferred to the Elmwood Mennonite Brethren Church.

Toews, John A. A History of the Mennonite Brethren Church: Pilgrims and Pioneers. Fresno, CA, 1975: 162. Available in full electronic text at: https://archive.org/details/AHistoryOfTheMennoniteBrethrenChurch.