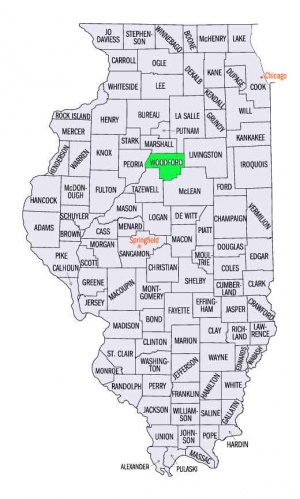 The first body of Amish Mennonite settlers in Woodford County came as immigrants from Alsace in 1831 and settled in Worth Township along the Black Partridge Creek northwest of the present town of Metamora. In 1833 Christian Engle, a bishop ordained in Europe, or­ganized this body of believers into a congregation. The members met in homes until 1854, when a brick meetinghouse was constructed, called the Part­ridge Church. Most of the settlers later moved to the prairies east of Metamora and formed the Meta­mora congregation. The Partridge Church was the first German church west of Ohio and the second of any denomination in Woodford County; it was for years the church home for all Mennonite immi­grants, although they may have settled at some dis­tance. In 1834 a settlement was made near Congerville, known as the Mackinaw Settlement. This later developed into three congregations: Roanoke, Goodfield in Woodford County, and North Danvers in McLean County. Goodfield later merged with the Tremont congregation to form the Morton Mennon­ite Church.

There were approximately 1,500 Mennonites living in Woodford County in the late 1950s, about 7 per cent of the total population. In addition there was approximately the same number of the Apostolic Christian  faith sometimes called the "New Amish," who have much in common with the Mennonites in their ori­gin and doctrine. The Mennonite Home for the Aged at Eureka was operated by the Mennonite Board of Missions and Charities (Mennonite Church) through a local board.