From GAMEO
Revision as of 20:11, 26 October 2017 by RichardThiessen (talk | contribs)
(diff) ← Older revision | Latest revision (diff) | Newer revision → (diff)
Jump to navigation Jump to search
A checked version of this page, approved on 26 October 2017, was based on this revision. 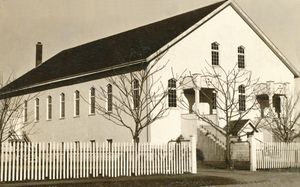 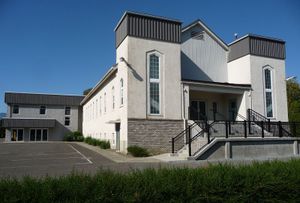 In 1931 Johann A. Harder was elected to serve as leading minister after Peter Dyck moved to Vancouver. Harder served for 18 years and was also an instrumental leader in the larger Mennonite Brethren conference. Soon after the congregation organized, a significant number of members began holding their own services in neighboring Greendale, formally organizing in 1931 as the Sardis Mennonite Brethren Church (later Greendale Mennonite Brethren).

The Yarrow church quickly organized Elim Bible School in 1930 and hired Peter D. Loewen to be the instructor. Loewen also served as the congregation's Sunday school superintendent for 35 years, overseeing a ministry that at its peak in 1953 included 461 students, 40 classes and 72 teachers. The school ceased operations in 1955. At the high school level the church, in cooperation with the Greendale and Chilliwack MB churches, started Sharon Mennonite Collegiate Institute in 1945. Owing to the collapse of the raspberry market, this school was closed in 1949. However, by 1951 the Yarrow MB church opened Sharon Mennonite Collegiate, which by 1960 had an enrollment of 114 students in grades six to twelve, along with a staff of seven teachers. The school closed in 1969.

Church leaders were elected by congregational vote. However, in the early years leadership in the church rested in the non-elected church council (Vorberat) composed of all ordained ministers, whose numbers were considerable. As result of membership agitation, in 1937 the church council was changed so that the congregation elected a majority of its members.

The Yarrow congregation had a strong heart for missions and was active in supporting local and foreign mission endeavors. Local outreach was carried out in Haney, Pitt Meadows and Hope, and members of the congregation were active in the West Coast Children's Mission and the teaching of Daily Vacation Bible School in a number of communities. Funds were foreign missions were raised through missions auctions, and women's fellowship groups were very active in contributing crafts and baked goods to these auctions. Many from Yarrow felt the call to foreign mission fields, including Susie Brucks, Henry and Elsie Brucks, Jacob and Ann Loewen, and Abe and Sarah Esau.

Music was a central component of congregational life. The church had several choirs and other musical groups led by H. P. Neufeldt and George Reimer, who was choir director for 24 years. In the early 1940s the youth choir had as many as 90 members. In time Yarrow became known for its musical festivals (Saengerfeste).

The congregation continued to grow through the migration of people from the Canadian Prairie provinces to the Fraser Valley. It completed its first buildings in 1930, but due to the rapid growth of the congregation, a new building was constructed in 1938, seating 1,200. Two dedicatory services, attended by a total of 3,000 individuals, were held on 20 November 1938. A Bible school building was constructed in 1946. By 1948 it had become the largest Mennonite Brethren congregation in Canada with a membership of 970. However, the economic recession that affected the raspberry market after 1948 and the flood occurring that year encouraged many families to move elsewhere, especially to Vancouver, and the congregation's size and influence in the larger denomination began to wane.

The congregation began to make the transition from German to English with a bilingual service in 1957 and separate German and English services in 1968. The church building was remodeled between 1965 and 1968 to add a foyer, a remodeled kitchen, and several large rooms for Sunday school. The main sanctuary was decreased in size considerably. In more recent years the church has been revitalized, with an active outreach into the community, and a multi-purpose gymnasium was added to the facility in 1991.

In February 2013 it was 85 years since Mennonites began meeting for worship in this community.

The Archives of the congregation are located at the archives of the Mennonite Historical Society of British Columbia in Abbotsford, BC. 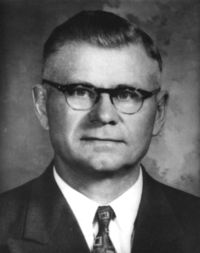