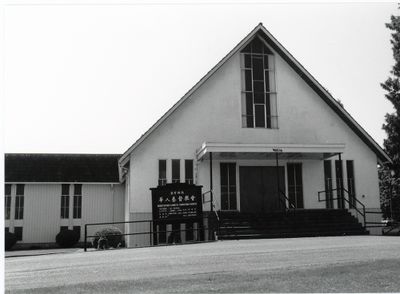 Abbotsford Chinese Christian Church was established in 1989 under the sponsorship of the British Columbia (BC) Conference of Mennonite Brethren (MB) Churches Board of Church Extension, with Yiu-Tong Chan serving as pastor from 1990 to 1996. The church formally chartered in 1990 and became financially self-supporting in 1993. The congregation joined the BC MB Conference in 1991. The Chinese community in Abbotsford is small, and Chan opened a Chinese school to introduce non-Christian families to the congregation and eventually to the Lord. In the beginning, the church shared a building with King Road Mennonite Brethren Church. When King Road built a new sanctuary in 1995, the Chinese congregation was given sole use of the old sanctuary.  At that time the congregation had 35 members. Chan left in 1996 to become pastor of Vancouver Chinese MB Church. He was replaced by Walter Lee, but he left in 1999.

The congregation dissolved in 2006.  A number of the members joined the King Road congregation where they are involved in a Chinese Bible study, while a number of other members began attending a Christian Reformed congregation in Abbotsford.