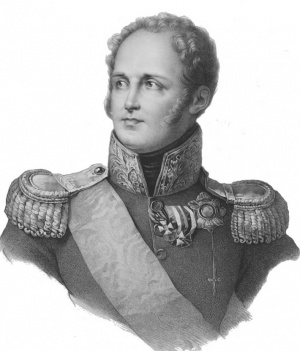 Alexander was a great benefactor of the Mennonites, confirmed the great charter of privileges of his father Paul I of 6 September 1800, and took a friendly interest in them. To the Molotschna colony he made a gift of six thousand rubles for a church building. Good evidence of his paternal benevolence were his two visits to the Mennonite colonies on 21 May 1818 and in 1825 shortly before his death. His benevolent friendly manner in his dealings with the Russian Mennonites and in his acceptance of their simple hospitality, was remembered in some families. Many Mennonite villages in Russia were named after him or his nephew Alexander II, such as Alexanderkrone, Alexanderfeld, Alexandertal, Alexanderheim.