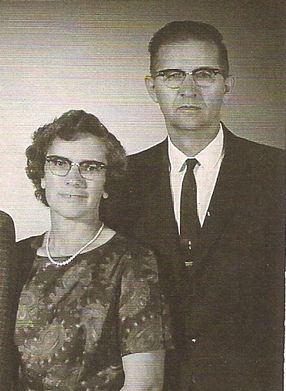 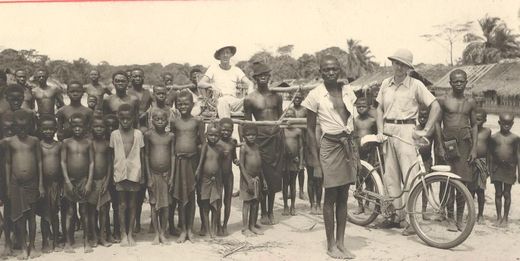 Willie Baerg arriving in Bololo on a bicycle to hold an evangelistic service with missionary Ratzlaff, 1949
Source: Centre for MB Studies, NP149-01-0199

Willie was baptized on 19 July 1931 and joined the Mennonite Brethren Church at Arnaud, Manitoba. Margaret Baerg was baptizied in 1933 and joined the Winkler Mennonite Brethren Church (Manitoba). They both attended Winkler Bible School -- Willie from 1934-1938, and Margaret from 1934-1937. They both studied at Prairie Bible Institute (Three Hills, Alberta) from 1940-1942. Willie and Margaret were ordained in 1942 by A. H. Unruh, having been accepted as missionaries by the Board of the Canadian Africa Mission Society. Due to the war, they were unable to go in 1942, and took up home missions work among Canada's aboriginal people with the United Church at God's Lake in Northern Manitoba.

By the end of 1945, conditions had changed with the end of World War Two, and in January 1946 Willie and Margaret and their two young children left for Belgian Congo (later known as the Democratic Republic of Congo), under the Board of Foreign Missions of the Conference of the Mennonite Brethren Church of North America. For this first 6-year term the Baergs worked in the region of Dengese and Bololo, where the first Mennonite Brethren missionary from Canada, H. G. Bartsch and his family had begun a mission in 1933. Learning the language and adjusting to the culture and climate, they employed hundreds of local people to clear land, make bricks, construct buildings and develop an education and medical program, all with the goal of sharing the Christian gospel. In 1952 they left the Djongo Sanga mission station in the Kasai district and returned to Canada. During this first furlough they were kept busy visiting churches and reporting on the mission. They lived in Winnipeg, Manitoba and in Linden, Alberta.

In 1954 the Baerg family returned to Belgian Congo. During the 2nd term they lived at the Panzi mission station. Health problems arose with one of their daughters, which resulted in Margaret returning to America with the children in 1956, and Willie remaining for another year, returning in 1957. After some time in Hillsboro, Kansas, the family moved to Morden, Manitoba where Willie taught at the Winkler Bible School during the 1957-1958 academic year.

The Baerg family returned to Belgian Congo for the third time in 1958. From 1958-1960 they lived at the mission station at Lusemvu. During this term there was much unrest in the country due to a growing push for independence. When the Revolution broke out in 1960, the Baerg family fled to Angola, and eventually returned to Canada. While based in Morden, Manitoba, Baerg began a radio ministry in the Lingala language through the Christian Radio Station ELWA in Monrovia, Liberia -- a ministry he continued for over 10 years. In 1962 the family moved to Port Rowan, Ontario where Willie became pastor of the Port Rowan Mennonite Brethren Church for several years.

In 1965, Willie and Margaret and the youngest children (Bruno and Wilma) returned to Africa and were stationed in Kinshasa and Kitwit. The children attended The American School of Kinshasa. In 1969 the family returned to Canada for a year, followed by another term in Kitwit from 1970-1972, before returning to Canada again. Between 1972 and 1983, Willie Baerg made a number of short term trips back to Zaire (as the country was called from 1971-1997), sometimes alone for a month and sometimes for 3 or 4 month periods with Margaret. Back in Canada during this period they lived in Ontario and were called by the Ontario Mennonite Brethren Conference into Home Mission work. From 1972-1975 they worked in the village of Spraggue, and from 1975-1977 they gave leadership to founding the Niagara Falls Christian Fellowship. In April 1978 Willie and Margaret Baerg joined the Virgil Mennonite Brethren Church where they continued to be active participants. The Virgil Church helped in funding the travel cost for several trips to Zaire for Willie and Margaret when they were invited to return to provide leadership training, pastoral conferences and evangelistic campaigns.

Willie Baerg's theme was "Occupy until He comes." His desire was to be found faithful to his calling, and not to be found idle. His life was an example of love and dedication to his Lord.

Baerg, W.G. Journey into the Heart of the Congo: The story of a missionary endeavour edited by Bruno W. Baerg. Saskatoon, Saskatchewan: Baerg Publications, 2000: 161-164.