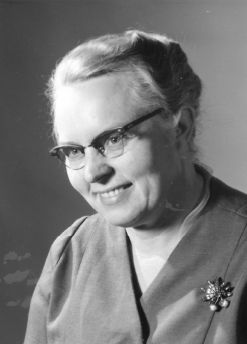 Linda Banman: missionary to Curitiba, Brazil; born on 8 October 1921 to Abraham "Abram" Banman (15 October 1893-22 April 1985) and Helena (Sudermann) Banman (1 October 1894-6 November 1958) in Winkler, Manitoba, Canada. Linda left Canada in 1949 to serve as a teacher and church planter in Curitiba, Brazil, and later worked at the Portuguese-speaking church in Winnipeg, Manitoba. She retired when her health declined, and she died in Winnipeg on 9 April 2008.

As a child, Linda Banman lived with her parents, younger sister, and two half-brothers from her mother’s first marriage. She completed her elementary education at the Burwalde School and then studied for a time by correspondence. Linda completed her final two years at the Winkler High School Collegiate before graduating in the spring of 1942. Next, she studied at the Manitoba Provincial Normal School in Winnipeg to get her teacher’s certificate. After two years of teaching at the high school near Morris, Manitoba, she went to study at Tabor College in Hillsboro, Kansas, USA.

Linda Banman graduated with a theology degree in the spring of 1948, about a year after she had applied to the Mennonite Brethren Board of Foreign Missions for service in Brazil. She was ordained at the Winkler Mennonite Brethren Church on 22 August 1948 and left for South America from New Orleans, Louisiana, on 5 October of that year.

On her arrival at her place of service in Curitiba, Linda Banman had many responsibilities, including the supervision of an orphanage and schools in the area, as well as church planting. Administration was an important part of her work, especially in the first two years when she was the only long-term mission worker at the station. When others came to join her, she shared supervision of the orphanage, which had a capacity of sixty children, as well as other aspects of the work. She served in Brazil from 1948 to 1972 and from 1983 to 1986 with furloughs every seven years, which allowed her to rest and to prepare for her next term.

From 1972 to 1983, during her longest break from her work in Brazil, Linda helped to lead a Portuguese-speaking congregation in Winnipeg. Her tasks with the church included leading Bible studies, helping new immigrants with learning their way around Winnipeg, and working with new mothers to deal with various issues of child-rearing. Linda then returned to Brazil, where she continued her work in Curitiba.

Linda Banman was a dedicated mission worker who spent many years of her life serving the people of Brazil and the Portuguese-speaking community of Winnipeg. Her commitment to the communities where she served provided an example of perseverance for others to follow.