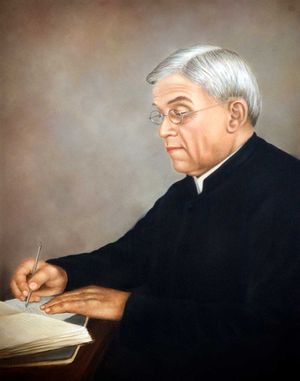 Daniel Henry "D. H." Bender was a bishop and leader in the organization of church-wide activities of the Mennonite Church (MC), with direct contributions to publication and education. He was born near Grantsville, Maryland, the second son in the family of eight sons and one daughter, of John and Elizabeth (Otto) Bender. The father was a member of the Amish Church and had emigrated from Germany in 1851 because of conscientious objection to military service.

Daniel graduated from the Preparatory and Normal School at Meyersdale, Pennsylvania, taught grade schools in his home community for 20 years, and helped to conduct normal schools.

At the age of 21 (1887) he was ordained to the ministry at Springs, Pennsylvania. He was ordained bishop in the Hesston, Kansas., congregation. In these two capacities he served the church until his resignation in 1930. During his early years he was active in conducting Bible conferences and evangelistic meetings throughout the church.

Early in his church work he became one of a group of leaders who through lifelong activity did much to mold the thought and activities of the church during an important period of awakening and expansion into organized church-wide activities. With his associates he was active in promoting church conferences and the beginnings of the General Conference and of the mission, education, and publication work of the church. He served in important positions on each of these boards, as well as on numerous church committees of various kinds. He was moderator of the Mennonite General Conference in 1915.

His editorial work began with the writing of the Advanced Sunday School Lesson Quarterly in 1903, which he continued for nine years. He also inaugurated in 1905 and wrote for 17 years the Primary Sunday School Quarterly. The Lesson Picture Cards he also began and wrote for some years. In 1904-1906 he was editor of the Herald of Truth, the church organ, and the Words of Cheer, a children’s paper, published at Elkhart, Indiana. In 1906 he went to Scottdale, Pennsylvania, to become office editor of the Gospel Witness, and in 1908 of the Gospel Herald, merging the two former papers into a new church organ.

His editorship ended in 1909 when the Mennonite Board of Education called him to head a new school at Hesston, Kansas. He became principal of Hesston Academy and Bible School, and later president of Hesston College and Bible School when a college department was added, and continued until his retirement in 1930. In this position his influence became widely felt through the molding of the thinking and attitudes of students who were destined to become leaders throughout the church. He was also prominent in colonization activities, and served for years as the president of the Mennonite Board of Colonization, an inter-Mennonite organization with headquarters at Newton, Kansas. He retired to spend the last years of his life at Albany, Oregon. He was married three times (Ida E. Miller (15 December 1876-4 May 1902), Sallie Miller (17 April 1878-29 November 1918), and Anna Kreider 19 April 1894-18 February 1976). He was the father of seven children, among whom was Paul, professor of physics and registrar at Goshen College.-- Paul Bender

D. H. Bender's departure from Hesston College came not from voluntary retirement, but as a result of church discipline. His credentials as minister and bishop were removed by the Missouri-Kansas Conference, and the Mennonite Board of Education forced him to resign on 18 August 1930 as president of the college. The matter was briefly reported in the Gospel Herald only as a "moral lapse ... some years ago."

Bender readily confessed his responsibility when confronted about his incestuous relationship with his teen-age daughter Ruth (24 February 1902-3 May 1998), around 1920, several years after the death of his second wife. Ruth had "confessed" this "secret sin" under pressure from Maurice A. Yoder (22 September 1896-21 May 1973) at revival meetings at the Hesston College church. Yoder was a pastor at the College congregation, business manager at Hesston College, and chair of the local board governing Hesston College. Yoder was the source for making the confession of incest public, which led to the subsequent disciplinary action. Against the wishes of the Mennonite Board of Education, the local board also dismissed Ruth Bender as a teacher at Hesston College in 1930 in response to the indignation of some local community leaders.

Ruth Bender, who never married, moved to Cleveland, Ohio where she became a pioneer in teaching deaf children. She earned a PhD in 1956 and taught at Case Western Reserve University.--Sam Steiner