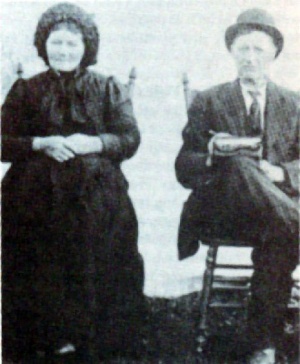 Johann F. Braun: successful Mennonite entrepreneur and community leader; born 26 April 1857 in the village of Friedrichstal, Bergthal Colony, South Russia. He was the fourth of eight children born to Jakob Braun (1826-1919) and Katharina (Funk) Braun (1827-1920). In 1875 Johann immigrated to Canada with his parents and three siblings. One married sister had come earlier. They settled in Gnadenfeld on the East Reserve in Manitoba. Johann married Helene S. Abrams (1861-1919) on 4 April 1880. Together they had 11 children of which six survived to adulthood. Johann Braun died of cancer on 25 June 1925.

Johann Braun attempted farming but was soon forced to seek other work for health reasons. In 1892 he moved to the village of Gruenthal (now Grunthal) and formed a business partnership with his brother-in-law Johann F. Krahn. "Braun & Krahn" bought a store and then built a saw mill and a grist mill. In 1894 they took over McCormich machine agency and also operated a cheese factory between 1895 and 1900. In 1901 "Braun & Krahn" sold their original store. During this time a Post Office was opened in the village and Johann became the first Post Master of Grunthal, a position he held until his retirement in 1922. Through his many business and government contacts Johann was able to learn English. Being able to communicate in English made it possible for him to apply for a commissionership in the community. As commissioner he was able to complete land deals and other transactions which saved people from having to make the trip to the City of Winnipeg. Johann also mediated and helped reconcile conflicts between neighbors. For several years he served as municipal councilor in Ward 6 and then served as reeve of the Municipality of Hanover for 11 years. When a group of Ukrainian immigrants settled near Grunthal , Johann, who had learned some Ukrainian during his childhood in Russia, made friends among them. As a result they came to him for advice and even to settle disputes. In 1911 "Braun & Krahn" became part of a new business venture, the Grunthal Milling Company which built a large new store. Johann Braun served as the general superintendent and secretary of this new company until he sold out in 1922.

During his life Johann Braun contributed much to the community in which he lived and gained a reputation for being a good business man but also a man of integrity and compassion.