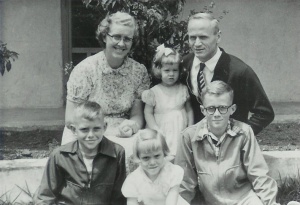 The last photograph taken of John and Mary Dyck with their family.
Source: Roland Dyck

John’s father was killed on 26 October 1919 when the village of Eichenfeld was attacked by anarchist bandits. Following the massacre, the family escaped 150 miles to Steinfeld. Now with the sale of the family threshing machine, Helene was able to provide for her children. In 1923 John emigrated from the Soviet Union with his mother and siblings and settled in Rosthern, Saskatchewan in 1924. Here John’s mother married John J. M. Klassen (23 March 1882 - 25 February 1949), a widower with eight children. John’s mother and step-father had two daughters together.

In 1929 John became a Christian under the ministry of C. N. Hiebert. He was baptized 28 July 1935 in Mullinger, Saskatchewan. He graduated from Bethany Bible School in 1941. In preparation for missionary service, he enrolled in a course in tropical medicine in Toronto, Canada.

Mary (Letkeman) Dyck was born 19 July 1922 in Aberdeen, Saskatchewan, one of eleven children born to John Lekeman and Margaret (Sawatsky) Letkeman. Mary grew up in great poverty. She was known as the girl with the smile. Since she was a frail child at birth, her parents prayed for her healing and dedicated her to the Lord’s service. At age 16 she accepted Jesus as her Saviour. She baptized 14 August 1968 in Aberdeen, Saskatchewan. She was blessed with a beautiful singing voice which she planned to use in Christian service. Mary’s call to missionary service was anchored in Matthew 4:19-20. Mary talked about “three assurances” in her life: personal salvation, the call to missions, and marriage to John Dyck.

In June 1944 the Mennonite Brethren Mission Board offered John and Mary a mission assignment in Cali, Colombia. They arrived in 1946 and immediately enrolled language studies. Their work included planting churches, leading Bible studies and Bible teaching, primarily in the cities of Palmira, Noanama, Istmina, and Medellin.

In early 1957 Mary struggled with complications of malaria, pneumonia and a toe infection. On 9 March 1957 John and Mary boarded a 24-passenger DC-3 plane to fly from Condoto to Cali to seek medical help. Contact with the plane was lost. Thirteen days later fellow missionary Jake Loewen and a search party of 50 crossed 13 Andean peaks to reach the site of the crash. Jake buried John and Mary in a joint grave in La Cumbre in the Andes mountains of Colombia.

In Colombia John and Mary were known as Don Juan and Donna Marie. These terms of endearment signified the close relationship the Dycks had established with Colombian people. John Dyck is remembered for courageous witnessing at a time when Evangelicals were not welcomed in Colombia.