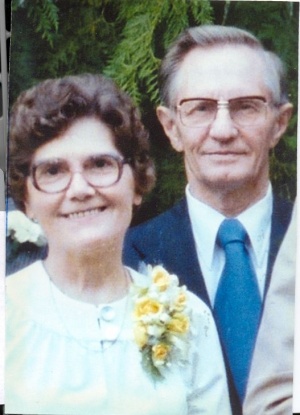 Jacob Herman Franz: minister and missionary; born on 26 July 1913 in Ebenfeld, Crimea, Russia to Hermann and Susanna (Wall) Franz. He was one of four children in the family. On 8 July 1942, Jacob married Helene Janzen. The couple had three daughters and three sons, all of whom survived childhood. Jacob died of a heart condition on 25 November 1978 in Vancouver, British Columbia, Canada.

Jacob grew up in the Crimea during the turbulent years surrounding the Russian Revolution and Civil War. He likely began his basic education in the village where he grew up, although circumstances delayed the completion of his schooling for some years. Jacob's parents died while he was still young, and he and his sister Agatha were taken in by family friends, Franz and Maria Koop. Agatha died three months later.

In 1929, when Jacob was 16 years old, the family immigrated to Canada, settling in Coaldale, Alberta. Jacob continued his education, studying at the Coaldale Bible School for three years. While there he was baptized by B. B. Janz on 9 August 1936 and joined the Coaldale Mennonite Brethren (MB) Church. He then attended Three Hills Bible School and after graduating at the age of 28, was asked to join his former teacher, A. J. Schierling, to teach at the La Glace Bible School in 1941-42. Here Jacob met Helene, a cook at the Bible school, and they were married the summer after his first year of teaching.

After getting married Jacob and Helene moved to Coaldale in 1942 where he taught in the local Bible school for two years. He was ordained by B. B. Janz in his home church two years later in 1944. After returning to La Glace to teach during the 1944-45 school year, Jacob and Helene were called by the Mennonite Brethren Board of Missions to work in Paraguay as the first missionaries to the Chulupi Indians, a nomadic tribe with no written language, living in the Chaco. Along with another couple, Bernhard P. and Susie Epp, Jacob and Helene Franz moved to Paraguay in March 1946. Several schools and churches resulted from this work.

In 1955 the Mennonite Brethren Board of Missions asked Jacob to become missions secretary for Paraguay. In 1961 he was assigned as missions secretary for South America and moved his family to Asunción, the Paraguayan capital.  Here he was instrumental in organizing the German Mennonite Brethren Church, which started in the Franz home with just over 20 members. Shortly after he ministered in the joint General Conference - Mennonite Brethren German Church venture in Asuncion. While in Asuncion he also assisted in the organization of the Mennonite Brethren Spanish Church and was instrumental in founding the first Mennonite Brethren Spanish school, and in time, also a theological school -- work that gave him great joy until returning to Canada in 1969. During those 23 years the family returned to Canada on furlough three times, serving the mission board in deputation and pastoring in Abbotsford and Greendale.

The return to Canada in 1969 was in part due to the needs of his growing family. Back home Jacob served the mission board in traveling to the various churches throughout Canada as an MB missions representative until the end of 1970. After serving Mennonite Brethren Missions/Services for 24 years Jacob took on a new role as pastor of the King Road Mennonite Brethren Church in Abbotsford, British Columbia, in 1971. Here he was instrumental in bringing an independent church into the provincial and national MB conferences. He served the church until 1978 when he died of a heart condition on November 25. Because of space considerations the funeral was held at the Central Heights Mennonite Brethren Church in Abbotsford on 2 December 1978.

Jacob Hermann Franz was a dedicated minister and missionary with a deep commitment to his church and to the various communities where he lived. Through all of his work in Paraguay and Canada, he was an example of service to his family, the people in the community, and to everyone whose life he touched.