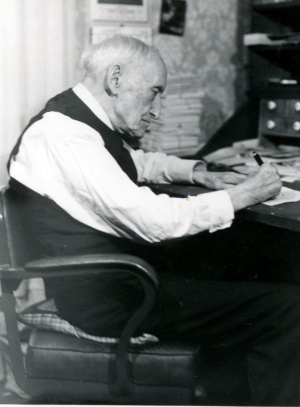 Reared on a farm; Hartzler early became interested in edu­cation, attended Wooster College and the Cook County (Illinois) Normal, and taught school in Noble and Lagrange counties, Indiana, before he was called to the Elkhart Institute as instructor in Bible in 1895. There and later at Goshen College his industry, his practicality, and his varied talents and endowments enabled him to render a unique service to the educational, missionary, and organi­zational activities of the Mennonite Church as min­ister, teacher, business manager, treasurer, and secretary. He had been ordained minister in 1881 and became known as an exhorter, evangelist, and Bible teacher even before coming to the Elkhart Institute. At this school and later at Goshen Col­lege he served as instructor, but he also helped to carry a large share of the heavy financial burdens of the Board of Education and its schools for nearly a quarter of a century.

Hartzler was the first pastor of the Goshen College congregation, served as secre­tary of the Mennonite General Conference from the date of its organization in 1898 until 1924, was secretary of the Indiana-Michigan Amish Mennon­ite Conference from 1888 to 1896, when his con­nection with the Elkhart Institute dictated the advisability of uniting with the Prairie Street Men­nonite Church, secretary of the Indiana-Michigan (united) Mennonite Conference from its formation in 1916 until 1924, member of the Mennonite Board of Education 1895 to 1917 and treasurer (and member of the executive committee) of the Men­nonite Board of Education from 1907 to 1917. Al­ways keenly interested in foreign missions, he be­gan in 1911 a long period of service as a member of the Mennonite Board of Missions and Charities. After ending his connection with Goshen College in 1917 he returned to Elkhart where, in 1923, he accepted the pastorate of the Prairie Street Men­nonite Church and served until 1940.

For many years Hartzler was editor of Rural Evangel, published by the Indiana-Michigan Conference. He was the author (with Daniel Kauffman) of Mennonite Church History, published in 1905, and (with J. S. Shoemaker) of Among Missions in the Orient and Observations by the Way (1912). In 1921 he wrote Mennonites in the World War or Nonresistance Under Test.