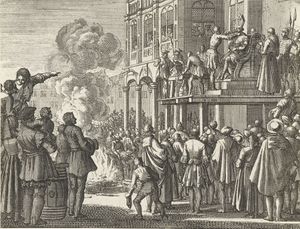 Jacob van Campen (Kampen), or Jacob Jansz van IJsselmuiden, also called Coomans, born 1505, a bishop of the Dutch Anabaptists and a martyr, exe­cuted at Amsterdam on 10 July 1535. He was a native of IJsselmuiden, was a cloth shearer by trade, but sometimes he worked as a peddler. He was married to Aeff Petersdochter of North Holland. It is rather strange that this important leader is not found in the martyr books. The reason for the omission may be that in his early period he had many contacts with revolutionary leaders.

Jacob van Campen was one of the 12 apostles sent out by Jan Matthijsz van Haarlem in the fall of 1533. His trips extended unto Münster in West­phalia and Emden in East Friesland; he also visited the Dutch provinces of Groningen and Friesland; his activity in the towns of Kampen and Rotterdam is known and in the provinces of North Holland and Utrecht he baptized a number of persons. He himself was baptized and ordained a bishop by Pieter de Houtzager. From early 1534 he mostly stayed at Amsterdam, then already the seat of a considerable Anabaptist congregation. In Feb­ruary 1534 Jacob van Campen and Pieter de Houtza­ger baptized a large number of persons at Amster­dam and van Campen held regular meetings there near the Jan Rodenpoorts tower. The assertion made by some authors, e.g., L. Hortensius and G. Brandt, that Jacob van Campen was sent from Münster by Jan van Leyden to be a bishop at Amsterdam is not correct. He warned against the revolutionary Münsterite principles, especially against polygamy, and opposed acts of violence and revolt. In a meeting of Dutch Anabaptist leaders held at Spaarndam near Haarlem in December 1534 or January 1535, where the question was discussed whether the Anabaptists of Holland should take up arms and go to Münster, van Campen argued that the coming of the Lord should be patiently awaited; when Jan van Geelen planned an attack on the city of Amsterdam (May 1535), Jacob van Campen "did not consent to this proposal."   The accusation of some authors like Vos and Mellink that van Campen belonged to the revolutionary wing of Anabaptism is not true. He was a fol­lower of Melchior Hoffman and a man of peaceful principles.

As to his interpretation of the Bible van Campen was of the opinion (like Cornelis Pietersz wt den Briel, while Obbe Philipsz was opposed to this view) that the Scriptures "stand on two hoofs" (see Gespauwde Klauw), i.e., he defended the doctrine that "all that is written in the Old Testament is also found in the New Testament and will take place either spiritually or literally." This opinion gave rise to much unsound interpretation of Old Testament prophecies.

Jacob van Campen was an important leader, whose activity was well known to the government. As early as 23 February 1534, a mandate of the im­perial stadholder of Friesland indicated van Campen as a principal Anabaptist, together with Mel­chior Hoffman, Obbe Philipsz, and Pieter de Houtzager, and on 2 March 1534, it was announced in Amsterdam that anyone who delivered Jacob van Campen or Jan Matthysz to the officials of justice would be rewarded. In May 1535 van Campen was arrested in Amsterdam. A widow who had given him shelter was hanged with her son before her own door. Van Campen was tried several times and also tortured. He did not forsake his faith. On 10 July he was sentenced to death and executed that very day. First his tongue "by which he has disseminated his false teachings" was cut off, then his right hand "by which he has rebaptized." There­upon he was beheaded and his corpse burned.

His confession during the trials, containing a number of valuable facts about the Anabaptist movement in Amsterdam, was published by Grosheide.