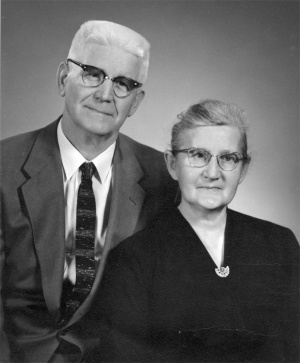 Jacob C. Krause: accountant and farmer; born 6 March 1894 in Schoenfeld, Ukraine, Russia, to Kornelius and Agatha (Dueck) Krause. He was the third child in a family of two sons and two daughters. Jacob’s father Kornelius died in 1901 at the age of 45. His mother Agatha remarried in 1903 to Heinrich Dirks and they had 3 children: one son and two daughters. In 1918 Jacob married Maria Rempel (26 February 1895–24 January 1992) from Gnadenfeld. They had four sons and five daughters: Carl, Erich, Melita, Mary, Naomi, Edwin, Elizabeth, Johanna and Albert (Erich, a twin, died in infancy). Jacob and Maria were baptized in the Mennonite Church in Gnadenfeld. Later they joined the Mennonite Brethren (MB) Church in Yarrow and were baptized by immersion on 17 July 1937. Jacob died of a heart attack in Chilliwack Hospital on 5 July 1970. Maria died in the Menno Hospital in Clearbrook in 1992.

In 1924 Jacob C. Krause left Gnadenfeld with his family and arrived at a port in Quebec on 15 October 1924. The family traveled by rail to Dalmeny, Saskatchewan, where Jacob found work on a farm. In March 1926, the family moved to Davidson, SK. It was here that Jacob read an advertisement that good farmland was available in British Columbia. The family traveled via the CNR to Chilliwack and then to Yarrow on the BC Electric train. The first few months they lived together with several other families in a house on Majuba Hill. Jacob chose a ten-acre lot on Eckert Road. Each day the men would walk down the hill to build their homes.

In Russia Jacob trained to be an accountant, so farming was not his first choice for a vocation. He had no choice but to try his farming skills in this new land. To supplement his income he also worked at Eddy’s Nursery in Sardis and at the hop gardens in Sumas Prairie. On the farm he experimented with different crops: rhubarb, asparagus, beans, and strawberries. But the most profitable crop turned out to be raspberries.

In order to market these crops the new settlers formed the Yarrow Growers Cooperative in 1936. Since Jacob had trained to be an accountant, he was chosen to be the manager. He served in this capacity until the late 1940s, when the berry market crashed and the co-op shut down. Shortly thereafter he got an accounting job with the Municipality of Chilliwhack, where he worked for the public works department.

Jacob always had an interest in the Yarrow settlement and desired that it flourish. He made his major contribution with his business and accounting skills.