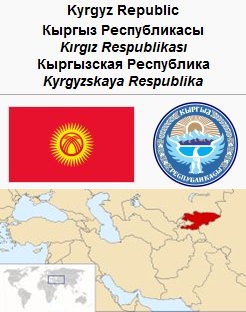 Located in the northeastern sector of what was Soviet Central Asia, the borders of Kyrgyzstan (formerly the Kirgizian Soviet Socialist Republic) touch Kazakhstan to the north, Uzbekistan to the west, Tajikistan to the south, and the People's Republic of China to the east. Its size, just under 200,000 sq. km. (76,880 sq. mi.), makes it one of the smaller republics in the area but equal nevertheless to the territory of Portugal, Belgium, The Netherlands, and Switzerland combined. Kyrgyzstan declared independence from the former Soviet Union in 1991. The Kirgizian republic had a population of 4,000,000 people in 1987. Kyrgyzstan had a population of 5,146,281 people in 2005. Its capital city is Bishkek.

The major ethnic group is Kirgizian; the major religion is Islam. Besides other Central Asian ethnic groups, the population includes sizable numbers of Russians, Ukrainians, and Germans. Most of the Germans appeared in this region during and after World War II, when the Soviet government undertook to resettle all Germans then living in the European part of the country.

The warm climate and better living conditions brought Mennonites to this region after Mennonites and ethnic Germans confined to labor camps farther north were released beginning in 1955 and 1956 (Spetskomandantura). Among the leaders at that time were Ältester (elders) Heinrich Voth and Peter Heese of Tokmak, not far from Bishkek. Heese and Hans Penner traveled to Moscow ca. 1966 with registration requests from a number of Kirchliche Mennonite congregations around Alma Ata and Frunze (Bishkek). Voth served as Ältester for all Kirchliche Mennonites in the Soviet Union until his death in 1973. He was succeeded for a time by the aging Ältester Johann Penner. A vital role was also played by Ältester Hans Penner of Frunze, who translated the Mennonite confession of faith into Russian.

In 1987 there were four active Kirchliche congregations in several outlying villages and towns not far from Frunze (Bishkek). There was also one Mennonite Brethren congregation in Novopavlovka, a suburb of the capital. The latter, a group of about 150 persons, was served by Ältester Martin Balzer. It was registered as an autonomous congregation in 1977.

The groups at Romanovka and Krasnaja Rechka, with about 140 and 165 members respectively, were registered in 1967. They were led by Ältester Abram Abrams and Peter Braun. The largest of these groups, at Tokmak, had about 200 members under the leadership of Ältester Johann Schellenberg. A small, 20-member congregation, still unregistered, also met regularly near the railway town of Ivanovka.

The Mennonites of this region, like those elsewhere in Central Asia, continued to stress their German identity. This meant that Low German was fostered as a language in the homes, even though Russian and other local languages were spoken everywhere else. High German was the language of the congregation in worship although some singing in Russian was included occasionally, and special services, e.g., funerals, might include Russian sermons. Young people often spoke Russian best and preferred its use in the services of the church.

Many Mennonites in the Kyrgyzstan have found their way into other congregations, mostly Baptist congregations, but sometimes Lutheran ones. Quite a few belong to unregistered groups of one kind or another. The emigration of the 1970s and of the late 1980s (Umsiedler) affected these communities significantly. Here too, many church members immigrated to Germany, including a number of ministers and other church leaders who were active in their home congregations at Tokmak or elsewhere.

Tourists have found it possible to visit in these congregations, although they were closed to outsiders before. People from these areas do visit relatives in the West and it is possible for Soviet emigrants, now living in the West to stay with their relatives in Kyrgyzstan for weeks and sometimes several months at a time. Frunze (Bishkek), like Alma Ata (now known as Almaty) and other capitals of republics, is highlighted on routes for tourists and various kinds of delegations.

Stricker, Gerd with Walter Sawatsky. "Mennonites in Russia and the Soviet Union: An Aspect of the Church History of the Germans in Russia." Religion in Communist Lands. 12 (Winter, 1984): 295-314.