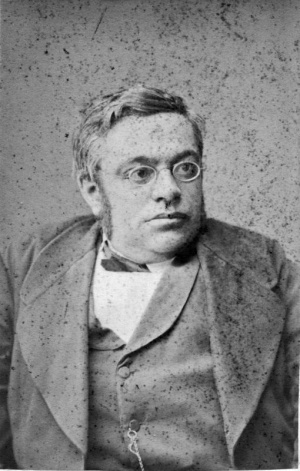 Wilhelm was the first German Mennonite to earn a doctorate and an influential researcher of German folklore and mythology. He wrote the definitive 19th-century history of Prussian Mennonites and emerged in the late 1860s as a strong proponent of Mennonite acceptance of military service.

Wilhelm’s father Jakob was serving as pastor of the Mennonite congregation in Friedrichstadt when Wilhelm, the oldest of six surviving children, was born. A sickly child, by age seven a severe curvature of the spine made breathing and walking difficult. In addition to asthma and problems with his nerves, Wilhelm missed a lot of school while tied to a bed (Streckbett) to straighten his spine. In 1836 the family moved to Danzig when his father was called to the pastorate. Wilhelm was baptized by his father in the Danzig Mennonite Church on 21 June 1846, where he remained a member until his death.

Beginning in 1844 Wilhelm followed political developments in Schleswig with dismay as the Danish king attempted to integrate the territory into the Danish kingdom. When Denmark and the German Confederation briefly went to war over the issue in 1848, Wilhelm wrote a poem to express his sadness that his disability prevented him from fighting for Germany. This conflict set the course of his life as he was engaged at the time in polemics with a Danish friend who justified Danish claims to Schleswig with the glories of Nordic mythology. In order to beat back these assertions, Wilhelm read Jacob Grimm’s German Mythology. Wilhelm finished high school in 1851.

Wilhelm studied at the universities of Berlin and then Tübingen where he was awarded a PhD for his dissertation that he dedicated to Jakob Grimm. From 1855 to 1859 he edited the Zeitschrift für Deutsche Mythologie und Sittenkunde. During this time he also finished his second doctorate (habilitirt) in Berlin. In 1857 he became a Privatdocent at the University in Berlin and offered classes in German Mythology and Gothic Grammar among other subjects. Due to limited enrollment and poor pay he also took a job as a private tutor for a family in Berlin and in 1861 moved to Silesia to tutor for a family there. In the autumn of 1861 he was back in Berlin but without any prospects for a job.

Discussions that year in the Prussian Parliament about revoking Mennonites’ military exemption caused a petition and delegation from the rural congregations to be sent to the capital. The Danzig congregation refused to participate in this protest action and instead suggested that a document be created to explain the history and harmlessness of the Mennonite military exemption. All the congregations agreed to this step and Wilhelm Mannhardt was hired for 200 Taler to write this book. At Easter 1862 he moved back in with his parents and commenced writing. On 24 June 1862, a commission met at the parsonage to listen to the manuscript read out loud from 9 am to 8 pm. A second reading was ordered for a larger group in Nogathau near Elbing a few days later. This group decided to eliminate sections that dealt with the political and economic involvements of Mennonites. The remaining sections were published in 1863 as Die Wehrfreiheit der Altpreußischen Mennoniten. Three thousand copies were printed and distributed to help make the case for the historical nature of the exemption, with at least one copy ending up in the files of the Ministry of the Interior, which was responsible for administering the draft.

Wilhelm obliquely noted the awkwardness of defending a principle with which he did not agree in the introduction where he stated that Wehrfreiheit did not reflect his personal opinions. He ultimately argued that the exemption was a binding royal agreement or privilege that under the General Civil Code could not be legally revoked without compensation. Since there could be no compensation for the loss of religious freedom, the exemption could not be altered by either parliament or king but only by the consent of the Mennonites themselves. The State Ministry rejected this claim, noting in the year the book was published that the Mennonite exemption had the appearance, but not the standing of a genuine royal grant of privilege.

Once the Parliament of the North German Confederation in 1867 stripped the Mennonites of their exemption and appeals to the king resulted only in the creation for them of special noncombatant positions in the Prussian army, Wilhelm wrote extensively in Mennonitische Blätter to argue for the acceptance of military service. He noted that Menno was wrong to seek a pure church separated from the world, that the New Testament did not always condemn war as sin, that John 15:13, “Greater love has no one than this, to lay down his life for his friends,” applied to military service, and that while Christians should not participate in wars of aggression, they could rely on the government to engage only in defensive wars. Mennonites on both sides of the issue credited his arguments with persuading many to accept military service.

His contributions to Mennonite historiography notwithstanding, Wilhelm is best known to posterity for his important work on German folklore. In addition to editing Wolf’s journal, he published over a dozen books on the topic, mainly while working in the Danzig city library from 1863-73 or afterwards when he had a small stipend from the Ministry of Culture to enable him to work fulltime on his research. Early in his career he followed the lead of Grimm and sought to link current peasant traditions with ancient Germanic religion. In the 1860s, however, he became convinced this approach was too simplistic and speculative and turned instead to gathering and creating a broad sample of statistical data on peasant practices from across northern Europe. His work laid the foundation for the mammoth Atlas der deutschen Volkskunde, the final volume of which was not published until 1985. His work influenced Friedrich Nietzsche’s conception of early human, and especially Greek, religion and is still cited in anthologies of folklore studies today.

Although focused on German folklore, Wilhelm was a regular and active participant in the Danzig Mennonite Church. He attended the Evangelical Alliance meeting in Berlin in 1857 with his father. In the 1870s, when his father’s health was failing, he would read sermons in his stead at church services. He maintained the congregational chronicle from 1862-1873. Numerous accounts attest to his friendly and cheerful nature and his willingness to help others where possible, especially by composing poems tailor-made for festive occasions or advising students on courses of study.

Wilhelm Mannhardt left behind two important and influential historiographies, a small one on Mennonites and a much more substantial one on folklore. Scholars have treated them as completely distinct bodies of work. The massive commentary on Mannhardt the mythologist rarely even hints at his Mennonite background, which was in any case irrelevant to Mannhardt in his scientific studies. There is, however, some evidence that his scientific and nationalist views colored his work on Mennonite history. Hiebner’s recent study on this question noted that his approach to writing Wehrfreiheit focused on history and examined Mennonite historical practices in ways analogous to his studies of other peasant groups. This more abstract approach perhaps made the task of writing a book with whose main goal he disagreed more palatable. It also highlights the extraordinary professional and academic capabilities of the man.

Brock, Peter. Freedom from Violence: Sectarian Nonresistance from the Middle Ages to the Great War. Toronto 1991; Pacifism in Europe to 1914 Princeton, 1972.

Williamson, George S. The Longing for Myth in Germany: Religion and Aesthetic Culture from Romanticism to Nietzsche Chicago, 2004.

This article is based on the original English essay that was written for the Mennonitisches Lexikon (MennLex) and has been made available to GAMEO with permission. The German version of this article is available at http://www.mennlex.de/doku.php?id=art:mannhardt_johann_wilhelm_emmanuel.

Johann Wilhelm Mannhardt, a Germanistic specialist, the oldest child of Pastor Jakob Mannhardt and Adriana Margaretha (nee Thomsen), was born at Friedrichstadt on 26 March 1831. The stories of his great-grandmother and of his mother, who was reared by her, stirred the interest of the boy in folk tales and philology, and especially mythology and folk ways and Germanic legend. He studied at the universities of Tubingen and Berlin 1851-1854. In 1858 he settled in Berlin as a private lecturer at the university. In several larger works, Germanische Mythen (1858), Die Götter der deutschen und nordischen Völker (1860), and Weihnachtsblüte in Sitte und Sage (1864), Dr. Wilhelm Mannhardt contributed to the scholarly development of folklore. He was also an active co-worker on the Zeitschrijt für Mythologie und Sittenkunde. He continued his study along this line when his frail and misshapen body compelled him to return to his paternal home in Danzig, where he was city librarian. By sending out questionnaires, by private research in folk tradition, by visiting the internment camps in the wars of 1864, 1866, and 1870, he unceasingly gathered material for an Urkundenbuch der Volksüberlieferungen he was planning. He also published some smaller works as the fruit of his research: Roggenwolf und Roggenhund, Die Korndämonen, Wald- und Feldkulte.

To German Mennonitism Mannhardt rendered an essential service in the time when the final struggle of the Mennonites of East and West Prussia for the preservation of their freedom from military service was in progress. In 1863 he published the valuable book, Die Wehrfreiheit der Altpreussischen Mennoniten, in which he presented a reliable, authenticated understanding of the historical development of the Mennonite principle of nonresistance and of the effort to preserve freedom from military service.

Wilhelm Mannhardt also devoted a great deal of energy to the service of the Danzig Mennonite Church. After 1869 he was frequently asked by the church to take the place of his aged father and read a sermon. This congregation owes to him its chronicle covering the years 1862-1873, which he worked out with conscientious truthfulness and insight into the problems of the decisive period when nonresistance was dropped and mixed marriages were permitted. On 25 December 1880, a heart attack put a sudden end to the life of this humbly pious and modest scholar with his rich knowledge and clear vision and honest search for the truth.