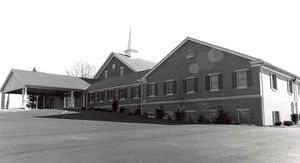 Mellinger Mennonite Church traces its roots to 1717 when some 300 Mennonites immigrated from the Palatinate to various parts of colonial Pennsylvania. A portion of this group, including families named Baer, Buckwalter, Denlinger, Groff, Hartman, Kreider, Landis, Leaman, Stauffer, and Witmer, settled in what would become East Lampeter Township, Lancaster County. Lancaster City later emerged immediately to the west of this Mennonite community and the region’s major thoroughfare to Philadelphia ran through the settlement, all of which contributed to the group’s economic prosperity.

Baer and Witmer families provided grounds for a cemetery (which dates to approximately 1746) and a limestone meetinghouse constructed in 1767. An addition was added to the west end of the meetinghouse in 1855. That addition remains today, converted into a private residence. The original 1767 structure was torn down after the construction in 1884 of a larger brick church building. In 1914 that building, in turn, was replaced with an even larger brick meetinghouse. During 1987-1988 a major addition that included Christian education space, offices, and a fellowship hall more than doubled the size of the 1914 building.

In the early 1800s, Martin Mellinger, the congregation’s well-known and widely-traveled deacon, lived on a farm adjacent to the church property, which gave rise to the colloquial designation of the 1767 meetinghouse as “the church at Mellinger’s” and, later, Mellinger Mennonite Church. Sunday morning worship convened at the Mellinger meetinghouse every other week, alternating with the nearby Stumptown meetinghouse in Upper Leacock Township. Beginning in 1943 services were held weekly at each place.

From at least the 1820s, each year Mellinger Church hosted one of the semi-annual gatherings of Lancaster Mennonite Conference, due to the meetinghouse’s central location within the geography of the conference. The church hosted conference sessions until 1990, after which the locations diversified.

In 1812 several Mellinger Church households sided with John Herr, of Strasburg, Pennsylvania, during the Reformed Mennonite schism. No Mellinger families were part of the 1893 Old Order division within Lancaster Conference.

Mellinger Mennonite was one of the first Mennonite congregations in Lancaster County to move from German to English worship, transitioning in the years after 1865 and seemingly without controversy. Sunday school began in 1888 and a women’s sewing circle organized in 1909.

During the 20th century, the congregation was an active supporter of overseas and domestic mission work and church planting. In the 1930s several early missionaries to Tanganyika (Tanzania) came from Mellinger. In 1938 members were instrumental is beginning Andrews Bridge Mennonite Church, an interracial congregation in rural Chester County, Pennsylvania. Beginning in 1949 Mellinger members were key figures in planting the first three Lancaster Conference churches in New York City. Due to the presence of congenital deafness in several Mellinger Church families, the congregation sponsored deaf ministry that became, after 1946, First Deaf Mennonite Church.

Notable 20th-century members of the congregation include Esther Eby Glass (1911-1972), a well-known writer of books and articles published by the Mennonite Publishing House, and Elvin G. Lefever (1920-1987), the founding administrator of Philhaven, a Mennonite-initiated mental health center that opened in 1951 in Mount Gretna, Pennsylvania.

As was customary in Lancaster Conference, ministers and deacons at Mellinger Mennonite Church were chosen by lot. This practice continued at Mellinger through 1973. In 1983 the congregation initiated a system of lay elders and hired its first salaried pastor. Since 2005 leadership has been in the form of a ministry team that includes not only the licensed pastors but also staff such as a minister of worship and a minister of Christian education.

Important community ministries today include the Parent and Preschool Center, an early childhood program begun in 1977 in cooperation with several other Mennonite congregations but located at Mellinger, and Emmaus Road Café, a coffee house ministry begun in 2007 in a retail space next to the church.

In the 21st century, Mellinger Church worship music moved in the direction of a contemporary style, led by a worship band. In 2005 hymnal selections accounted for almost two-thirds of the music sung; in 2016 more than two-thirds was contemporary praise music projected on large screens.

In 2019 the church was located on the eastern urban edge of Lancaster City. Pastors were P. Daniel Cloyd and Roger E. Weaver. Membership was approximately 300.

The Archives of the congregation are located at the church; additional congregational records are housed at the Lancaster Mennonite Historical Society, Lancaster, PA.

Mellinger Mennonite Church (MC), located one mile east of Lancaster, Pennsylvania, on the Lincoln Highway, is one of the strongest and largest congregations of the Lancaster Mennonite Conference. With Jacob and Felix Landis, Martin Bare, Jacob Kreider, Joseph and Dorous Buckwalter, and others, Mennonite immigrants from the Palatinate, able to buy land from the London Company by 1722, the fertile acres soon became a prosperous Mennonite community. The settlers first worshiped in private homes. But at least by 1767 had a meetinghouse, called Lampiter. A schoolhouse adjoining was added later. Martin Bare as minister signed the Dordrecht Confession at the 1725 conference in Germantown. Benjamin Landis was his early co-worker as preacher followed by Jacob Hartman, Bishop Tobias Kreider, and John Stauffer in the 18th century. Martin Mellinger (1752-1842), an immigrant from the Palatinate, was a prominent deacon. When a new meetinghouse, now a sexton's house, was built in 1855, it was named in his honor. A new meetinghouse was built on the present site in 1884, with extensive remodeling in 1894. The present large brick meetinghouse replaced it in 1914. This has always been one of the two largest congregations in the Lancaster Conference, and has remained largely rural, although located only three miles from the center of Lancaster. In recent years the city is rapidly moving to engulf the congregation and its building. Among the prominent ministers of more recent times have been John and Tobias Kreider, David Buckwalter, Adam Ranck, John L. and Sanford B. Landis. In 1956 the membership was 600, with Elmer G. Martin as bishop, and David L. Landis and Harry S. Lefever as preachers.