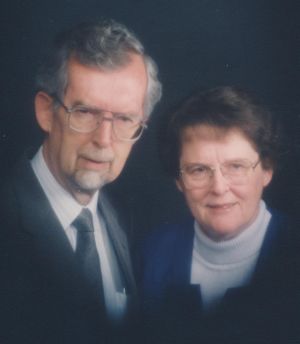 John Wolf Miller: professor, author, and founder of Reba Place Fellowship in Evanston, Illinois, USA was born 22 December 1926 in Lancaster, Pennsylvania, USA to Orie O. Miller (7 July 1892-10 January 1977) and Elta Wolf Miller (20 May 1893-14 February 1958). John was the third son and fourth child in a family of one daughter and four sons. On 18 September 1949 he married Louise Frances Heatwole (25 November 1928-12 February 2015); they had three children—Christopher, Jeanette and Karen. John W. Miller died 2 December 2017 at the home of Lowell and Jeanette Ewert. John and Louise Miller were buried in the Blenheim Mennonite Cemetery near New Dundee, Ontario.

John grew up in an unusual Mennonite family in Akron, Pennsylvania, since his father, Orie, was both part of the Miller Hess Shoe Company, founded by his wife’s family, and a founder of Mennonite Central Committee (MCC), also based in Akron. The Orie Miller family was wealthy, though Orie was gone from the family for extended periods of time because of his business and MCC responsibilities. At the age of six, John suffered complications from scarlet fever that left him deaf in one ear.

John Miller attended Eastern Mennonite School in Harrisonburg, Virginia for his secondary school education, graduating in 1945. It was here that he came to know Louise Heatwole, though they did not begin to date until both attended Goshen College in Indiana. John spent his first years of college at Eastern Mennonite College, but graduated from Goshen College in 1948 with a BA in Bible. Louise graduated a year later.

Both John and Louise Miller intended to study medicine after graduation, and eventually to serve in overseas mission. However, Harold Bender asked John to train in Old Testament studies in preparation for teaching at the evolving Goshen Biblical Seminary. After an intense meeting in summer 1948, John agreed.

Since he had taken science courses as an undergraduate, Miller also wanted to strengthen his background in literature. Consequently, his graduate studies led to degrees at Princeton Theological Seminary (BD, 1951), New York University (MA in Literature, 1951), and the University of Basel (ThD, 1955). His doctoral dissertation explored the influence of the prophet, Jeremiah, on the prophet, Ezekiel. It was published as Das Verhältnis Jeremias und Hesekiels sprachlich und theologisch Untersucht: Mit besonderer Berücksichtigung der Prosareden Jeremias. During his studies in Europe, John was an active participant in the Concern movement.

John W. Miller returned to teach at Goshen Biblical Seminary from 1954 to 1957. During these years John and Louise were influenced by renewal movements like the Iona Community in Scotland, and especially the Woodcrest Community of the Society of Brothers. A “Fellowship House” at Goshen College explored the implications of living in a disciplined Christian community. John’s active participation in this movement led to conflict with Paul Mininger and Harold Bender, the president and dean of the college.

The possibility of linking a new community with a voluntary service program in Chicago became an option pursued by John and Louise Miller, with the assistance of John's father. This was enabled when Paul Mininger asked Miller to take a three-year leave from teaching "to deepen [his] experience of the Mennonite Church." This ended in John and Louise Miller's move to 727 Reba Place in south Evanston, near the northern border of Chicago, and the formation of what became Reba Place Fellowship, a communitarian Christian fellowship. Although Miller assumed he would return to Goshen Biblical Seminary after three years, he was replaced at the seminary before his leave had ended.

For most of his years at Reba Place Fellowship, Miller worked as a counselor and administrator at the Chicago State Hospital, a facility for the mentally ill. He became influenced by the insights of Freudian psychology during this time; this had a profound impact on his later theological thinking. He also did some teaching at the North Park and Garrett Theological Seminaries.

In 1969 John W. Miller was invited to teach at Conrad Grebel College in Waterloo, Ontario in the area of Biblical studies. He retired from the college in 1992. During his years at Conrad Grebel, he was actively engaged in lay leadership training in the college’s adult studies program. He also served as the first chair of the Religious Studies department at the University of Waterloo, beginning in 1976.

At Conrad Grebel, John Miller became a prolific writer, including a regular column in the Mennonite Reporter during the 1970s. His academic writing especially focused on New Testament themes of the parables and the historicity of Jesus Christ. His writing on the latter topic became controversial, and some critics believed his theological positions were not adequately orthodox.

Miller also placed strong emphasis on the fatherhood of God, and extended that emphasis to leadership questions within the church and family. This also created dissonance with emerging feminist theologians and within the Kitchener-Waterloo house churches in which he was an active leader, and in which he was ordained as a pastoral leader by the Mennonite Conference of Eastern Canada in 1992.

After his retirement from Conrad Grebel, John Miller developed lay Bible study courses for a program called the Blenheim Bible Study Program, so named because of its connection to the Blenheim Retreat Centre near New Dundee, Ontario that was administered by the Blenheim Ecumenical House Church (formerly part of the K-W House Church) in which John and Louise Miller were members.

John W. Miller was a capable administrator and a passionate and tenacious scholar who did not avoid taking minority positions on matters of theology or college administration. He was able to communicate effectively both with lay people and fellow academics. Illness in his later years prevented his ability to speak, though he continued work on writing projects until days before his death.

Miller, John W. The Christian way: a guide to the Christian life based on the Sermon on the Mount. Scottdale, Pa.: Herald Press, 1969. 136 p. Also published as La voie Chretienne. Montbeliard, France: Les Cahiers de Christ Seul, 1981, and in a new edition in 2015.

Miller, John W. Step by step through the parables: a beginner’s guide to the modern study of the stories Jesus told: their meaning in his time and ours. New York: Paulist Press, 1981. 162 p.

Miller, John W. Meet the prophets: a beginner’s guide to the books of the biblical prophets, their meaning then and now. New York: Paulist Press, 1987. 250 p.

Miller, John W. How the Bible came to be: exploring the narrative and the message. New York: Paulist Press, 2004. 188 p.

Miller, John W. Blenheim Bible study: reading the Bible in light of the thoughts and intentions of those who created it: study guide/teacher edition. 5 vols. Waterloo, Ont.: Blenheim Bible, 2011. Revised editions of the 1997 volumes.

Miller, John W. A defining moment: when, where, and why the Christian scriptures were initially published in a single volume: a critique of prevailing views. Waterloo, Ont.: Blenheim Bible, 2011. 85 p.