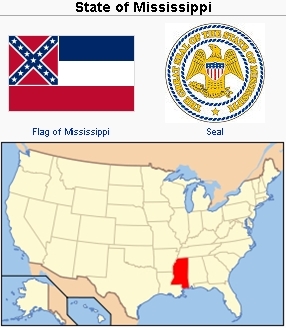 Mississippi was the 20th state admitted to the union (1817). It is located in the southern region of the United States of America along the Mississippi River, which flows along its western boundary. Mississippi is bordered on the north by Tennessee, on the east by Alabama, on the south by Louisiana and a narrow coast on the Gulf of Mexico, and on the west, across the Mississippi River, by Louisiana and Arkansas. The area of Mississippi is 48,434 square miles (125,443 km²) and the estimated population in 2008 was 2,938,618. In 2005, 61.72% of the population was White and 37.24% was African-American.

In 1957 Mississippi had one Mennonite (Mennonite Church) congregation, Gulfhaven, located about five miles (8 km) north of Gulfport in the far south of the state, founded in 1922, with 62 members in 1956, and a mission (MC) in Gulfport founded in 1947, with 22 members in 1956. Both belonged to the South Central Conference. A Civilian Public Service project under the Mennonite Central Committee, Camp Landon, near Gulfport, after 1945 served the Black community. In January 1957 it was taken over by the General Conference Mennonite Church. -- Harold S. Bender

Mississippi was considered by the Old Colony Mennonites for settlement in 1920 when they had difficulties in Manitoba and Saskatchewan. After the delegation had returned from South America in 1919, another delegation was sent to Alabama and Mississippi. After a visit by a land agent named Peters from Mississippi a delegation from Canada investigated the land and conditions offered in Mississippi in 1920. Although there was some question as to whether the "freedoms" promised by Peters would actually be granted, it was decided on 1 June 1920 that a delegation make a down payment of $250,000 on the land; at the border, however, the delegation with the money was stopped and sent back by the United States officials. Evidently patriotic organizations like the American Legion prevented the immigration of nonresistant Mennonites into Mississippi. The chronicler David Harder wrote, "Since we could not find out why the border was closed to us, we are compelled to accept it as a guidance of God, who wanted to spare us unforeseen hardships. Very likely the offer of freedom was the hoax of a land speculator." Thus the Old Colony Mennonites chose Mexico instead of Mississippi. -- Cornelius Krahn

In 1988 there were 18 Mennonite congregations in Mississippi. Six of these congregations belonged to the Church of God in Christ, Mennonite (Holdeman), and four, with a total membership of 227 were not affiliated with any conference. The remaining eight congregations belonged to the Gulf States Mennonite Fellowship (MC) and had a total membership of 287. Pine Lake Fellowship Camp (MC) was located at Meridian, and the Mennonite Board of Missions (MC) operated three voluntary service units at Macon and Philadelphia. The Conservative Mennonite Board of Missions (Rosedale) administered voluntary service units at Jackson and Prairie. -- Reynold Saawatzky