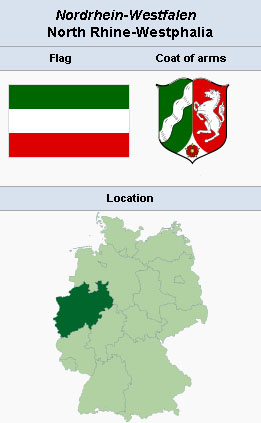 Nordrhein-Westfalen (English, North Rhine-Westphalia), a state in Ger­many formed in 1947. It was created by merging the government districts of Aachen, Düsseldorf, and Cologne in the Prussian Rhine Province with the Prussian province of Westphalia and the German Free State of Lippe (in 1949 small border areas were ceded to the Netherlands and Belgium). Its capital is Düsseldorf and its population was 17,996,621 at the end of 2007 (42.2% are Roman Catholic, 28.3% are Protestant, 2.78% are Muslim, 0.49% are Orthodox, 1.05% belong to small Christian groups, 0.2% belong to various eastern religions, 1.17% belong to other religions, and 24.7% claim no religion). This compares with demographic figures from 1952, when the state had a population of 13,147,100 (56% Roman Catholic and 39% Prot­estant). The state is divided into two area associations (Landschaftsverbände), Rheinland and Westfalen-Lippe, and the five administrative regions of Düsseldorf, Köln (Cologne), Arnsberg, Detmold, and Münster.

The old Mennonite congregations of Krefeld and Gronau were located here, and also the refugee congregations of Bergisches Land and Espelkamp. Of the con­gregations belonging to the Westphalian group, Bielefeld, Detmold, Münster, and Recklinghausen belong to Nordrhein-Westfalen, while Hameln, Rinteln, and Osnabrück are reckoned with Niedersachsen (Lower Saxony).

The following figures show that in 1955 the membership in this area included about 900 members in the origi­nal families and an increase of 1,600 refugee mem­bers, mostly from West Prussia. The Neuwied con­gregation, formerly closely connected with the Krefeld congregation in the Rhine Province, now belongs to the Palatinate.

The churches at Krefeld and Gronau, which had been destroyed in World War II, were rebuilt in 1950. The refugee congregation of Espelkamp acquired its meetinghouse in 1953 in a remodeled munitions storehouse. With the help of the Mennonite Central Committee (MCC) and later the Pax boys, the refugees were given supplementary food and clothing (of the nine areas in West Ger­many under the care of the MCC in the period of want following 1945, three lay in Nordrhein-Westfalen, viz., Krefeld, Gronau, and Brakel) and later also assistance in building settlements. After World War II the MCC built a refugee camp with a hos­pital in Gronau, which published a periodical Unser Blatt from 8 October 1947 to 15 June 1950. Settlements were built at Espelkamp (north of Bie­lefeld) in 1951 and at Bechterdissen (south of Biele­feld) in 1955. In general, the refugee congregations have rarely been able to retain the West Prussian organization of elder, preacher, and deacon; in most cases a pastor now serves under a church board of several members. The general organiza­tion of North German Mennonite congregations formed in 1951 and known as the "Gemeinden-ausschuss" was joined at once by the congregations in Bergisches Land and "Westphalia," i.e., Krefeld and Gronau. In 1948 the second Mennonite student conference (Studententagung) met in Krefeld. In Gronau the Vereinigung and the German Mennonite Historical Association (see Mennonitischer Geschichtsverein) met in 1948; the Historical Association decided to establish the Research Center (Forschungsstelle) at Göttingen, the home of the director Ernst Crous. In 1954 the Vereinigung met at Krefeld. Youth organizations were formed at Cologne and Espelkamp. In May 1955 a ministers' retreat (Predigerrüstzeit) was held at Espelkamp. The Krefeld Mennonite minister took a leading part in a petition for offerings on 11 December 1946 on be­half of relief. This appeal was to be presented to the Christians of all creeds throughout the world, and a sacrificial offering for the needy of Krefeld was to be made in all the churches of the city. In Heerewegen, near Utrecht, representatives of the Dutch and Northwest German congregations met on 7 May 1954 to try to renew old bonds of co-operation and find new ways of working together.

Gustav Kraemer (1863-1948) served as pastor of the Krefeld congregation for many years; he was followed by Dirk Cattepoel 1937-51, and Daniel Reuter 1951-    . Hendrick van Delden (1872-1950), an elder of the Gronau congregation, and Reinhard Rahusen (1883-1951), a minister of the same con­gregation, were of great importance for the entire Mennonite brotherhood. The large textile firm M. van Delden & Co. celebrated its centennial in 1954.