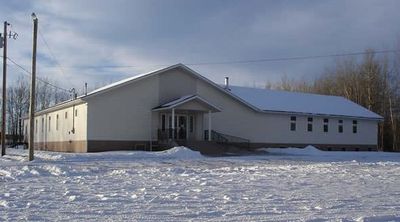 Prespatou Mennonite Church began services and formally organized in 1974, the year it became affiliated with the Chortitzer Mennonite Conference. The first building was occupied in 1974, with a subsequent building program in 1996. The congregation originated through an outreach ministry to Old Colony Mennonites by Dan Wiebe and John Harder, who had both moved to Prespatou from Burns Lake. Cornie and Mary Martens eventually arrived to provide leadership. John Harder was elected minister of the congregation in 1974 and ordained in 1975. He served until his death in 1983.

The language of worship is English and German; the transition from German occurred in 1976.