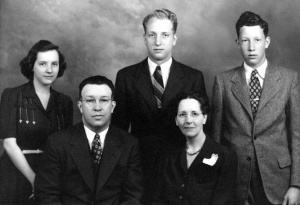 Rosenberger grew up in Philadelphia, Pennsylvania and was baptized there in 1911 at the First Mennonite Church by N. B. Grubb. After attending Penn State University for two years to study agriculture, he transferred to Bluffton College in response to God’s calling and graduated in 1921. Two years later he earned a divinity degree at the Witmarsum Seminary, located on the Bluffton campus. Rosenberger was ordained on 10 June 1923 in the Germantown Mennonite Church, Philadelphia, Pennsylvania, by N. B. Grubb. In 1932 he earned a master’s degree from the University of Pennsylvania, and in 1950 Bluffton College conferred on him an Honorary Doctor of Divinity degree.

Following pastorates in Iowa and Ohio, Rosenberger moved to Quakertown, Pennsylvania in 1930, where he succeeded his father as pastor of the Swamp Charge, composed of Bethany, Flatland and West Swamp Mennonite Churches. In 1934 Rosenberger was called to become Assistant to the President of Bluffton College, and in 1935 he assumed Presidency of the college, a role he held for the next three years. With the country in a severe depression, the college suffered financially and was unable to meet its obligations to creditors and pay full salaries to faculty. Additionally, there was some discord among the faculty. With strong, calm and steady leadership, the college remained open despite some suggestions of bankruptcy. However, the stress exacted a heavy toll on Rosenberger and, suffering from near exhaustion and a nervous breakdown, he resigned in the fall of 1938.

For the next ten years Rosenberger was pastor of Salem Mennonite Church, Dalton, Ohio, where he was able to regain health and pursue a rewarding pastorate. He provided steady guidance with his loving pastoral care, mediating tensions created by the World War II draft in which young men of the church had been called into service, some as conscientious objectors and others accepting military service.

In 1948 Rosenberger returned to Quakertown, Pennsylvania, accepting a call to become pastor of West Swamp Mennonite Church, which at that time became independent from the Swamp Charge. He served there until he retired in 1962, although thereafter he served as interim pastor for various Eastern District Conference churches.

Throughout his ministry, Rosenberger was extensively involved in education and conference offices and boards. He served on the Mennonite Biblical Seminary Board, beginning in 1936 and as chairman from 1945 until his retirement in 1962. During this long tenure, he presided over many difficult matters, including establishing a seminary in Chicago (in association with Bethany Biblical Seminary), and then moving the seminary to Elkhart, Indiana and associating with Goshen College Biblical Seminary. On these and other matters, Rosenberger was able to gain consensus despite theological and personality differences. His leadership was wise and capable of handling the many problems of those years.

During the same period of time that Rosenberger served the Seminary Board, he also served on the General Conference Board of Education for 26 years, including 21 years as secretary, during which time he, together with his father Seward M. Rosenberger, compiled A Guide to Christian Teaching, which served for many years as a catechism for General Conference Mennonite youth.

Rosenberger was an institutional man, serving the church, college and seminary. He gave wise leadership and had the heart of a devoted pastor.